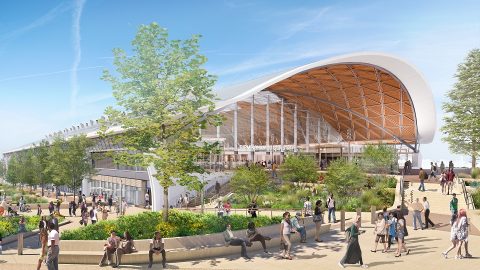 HS2, one of the largest infrastructure projects in the UK, is gradually being implemented. The High Speed Rail Group highlights six strategic priorities that the planned line between London and Northern England should address. What are they?

The High Speed Rail Group (HSRG), an umbrella organisation representing companies with relevant experience and an interest in high-speed rail, has appealed Britain’s Cabinet to decarbonise the country’s railways by 2040. According to the association, the planned HS2 line will play a key role in this process if it addresses six strategic priorities. “We are calling on the Government to make high-speed rail a central plank of their transport decarbonisation strategy, setting more ambitious carbon targets than those currently in place, including decarbonisation of the whole rail network by 2040,” HSRG stated.

The first priority is the acceleration of the modal shift due to the HS2. As a result, it will have a great impact on the behaviour of British passengers and will eventually lead to decarbonisation. HSRG determined several aspects of this process: modal shift itself, destination shift and service shift. This means that people will prefer to travel by train than by plane or car, they will travel on longer distances and will get to or from the railway stations by using environmentally-friendly modes such as a bicycle. As for the latter point, the report gives the Netherlands as an example to follow. “In the Netherlands, the cycling modal share at the home-end of trips to railway stations has increased from 36 per cent in 2005 to 43 per cent in 2016, with bike-rail travellers preferring larger stations with intercity services to suburban ones,” the document reads.

Three other strategic priorities are strictly dealt with decarbonisation. Among them are decarbonisation of vehicles and goods as well as reduction of CO2 emissions in general. The decarbonisation of vehicles includes the further electrification of the UK’s railway network and implementation of the new technologies. “There are opportunities in future High Speed Rail phases and wider rail electrification to integrate expansion of grid capacity and storage as transport and heat electrification is set to increase demand on the grid. Electrification is not just about vehicles currently using Internal Combustion Engines (ICE), but also e-bikes and new modes such as scooters to cater for a wider range of journeys, whether on their own or in conjunction with public transport. This requires integration of policy, procurement and funding, whether for purchase incentives to infrastructure design,” the report states.

As for decarbonisation of goods, it is one of the biggest challenges for Britain. The HSRG’s paper highlights that only 9 per cent of freight was moved by rail (the 2018 data). It is one of the lowest figures in Europe: this share in Germany is 18 per cent and 35 per cent in Switzerland. When the HS2 line is launched, this could become a new stage in the UK shift-to-rail policy as the planned railway will unlock the capacity of several mainlines. At the same time, HSRG emphasises that the Government must implement some measures: to set up modal shift targets for rail freight sector after launching HS2, to develop wider rail upgrades to maximise freight benefits from HS2 and to upgrade the road user charges for heavy goods vehicles.

The third dimension of decarbonisation is the reduction of CO2 emissions in the other areas, besides the rail sector. “HS2, as a new transport spine for Britain able to operate on zero carbon electricity, will be transformative. Not just for these longer journeys but also by enabling the full potential of existing railways to cater for local travel and unlock sustainable housing,” the report reads. At the same time, the construction of the HS2 line will reduce CO2 emissions in the UK by shifting more and more passengers from planes to trains.

Two more priorities are related to technologies and innovations. First, HS2 will change planning in several regions of England. As the line will become a new reliable and fast mode of transport, it will change commuting in the nearby communities and the related infrastructure. Second, there will be implemented some innovative technologies on the high-speed line and, therefore, railways, together with other modes, will become a part of seamless mobility, also known as MaaS.

“Mobility as a Service (MaaS) is the most talked-about innovation in transport but so far has had a city focus, eﬀectively ignoring the longer journeys that produce the most carbon. The potential benefits of MaaS for customers are greatest for infrequent rather than daily journeys that they are less familiar with. When HS2 is completed, it will be quicker to travel on it from London to Leeds than on the Central Line across London,” the report states.

HS2 Ltd hasn’t got a plan to use zero carbon electricity for HS2 trains, it should copy Transport for London that is going to power London tube trains by issuing PPA’s for renewables,community owned solar and wind farms with batteries which Riding Sunbeams Ltd will use for the South Wales Metro could be used along with microgrids connecting roof top solar panels on buildings and virtual power plants,home storage batteries hooked up to form a virtual battery that Tesla uses in Australia.

Yes, I can just see families going on holiday carrying all their luggage on bicycles! Why are all the main stations for HS2 being built with poor connections to other stations they might want to use – e.g. Euston and St Pancras – a trek along the Euston Road; Birmingham Curzon Street 10 minutes from New Street. Further they are designed to be nearere to large airports, such as Manchester and Birmingham, which will only encourage more long-distance flights, thus worsening air pollution.