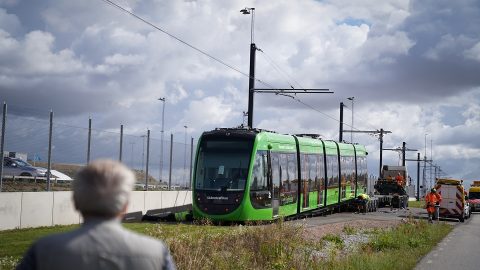 The city of Lund is gearing up to launch a tram network in the mid-December. Two Urbos 100 light rail vehicles have been already delivered from Spain for tests and adjustment works. Lund will be the fourth city in Sweden that operates its own tram network.

Lund will join the list of Swedish cities that operate the tram networks on 13 December. There are three existing tram systems in Sweden: in Stockholm, Göteborg and Norrköping. Lund will become the fourth city with trams on its streets. To this end, the city municipality purchased from the Spanish manufacturer CAF seven five-section bi-directional trams of the Urbos 100 type. The first vehicle was delivered to Lund on 29 July while the second unit arrived on 7 August.

Both trams were transported from Spain to Sweden by using multimodal logistics solutions. First, they were transported from CAF’s plant in Zaragosa to the Spanish port of Santander on a specialised articulated lorry (around 400 kilometres), then to the Swedish port of Göteborg by sea. The final section, from Göteborg to Lund (over 260 kilometres), was again travelled with the help of an articulated lorry. Five more trams will be delivered to Lund during the autumn and winter in the same way.

The tram network in Lund will initially consist of one line. It has nine stops and a length of 5.5 kilometres. This line will provide a comfortable and fast connection between Lund Central railway station and the research facility of the European Spallation Source. The construction works started in February 2017.