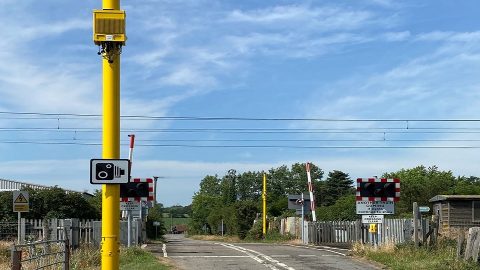 British infrastructure manager Network Rail plans to reduce the number of accidents at the level crossings in East Anglia. To this end, it is installing red light safety enforcement cameras. This measure is being performed on behalf of Greater Anglia that operates trains in the region.

Red light safety enforcement (RLSE) cameras will monitor the car drivers trying to run through a level crossing when the road traffic lights are flashing red. These devices will capture the violations and, in such a way, will provide evidence to support legal action for lawbreakers: a driver’s awareness course, a fine of 100 British pounds (around 111 euros) or 3 points on their licence, or a prosecution case. This project is financed by Greater Anglia that is interested in increasing train traffic in East Anglia.

In addition, Network Rail will install special signs to inform about camera monitoring. The British rail infrastructure states that the key goal of RLSE cameras is not to fine the car drivers but to make them more disciplined. “Knowing that jumping the lights or swerving the barriers at a level crossing will almost certainly result in a prosecution is enough to make most drivers think twice. This isn’t about money. For us, the perfect scenario is to have everyone cross the railway safely with no penalties issued,” noted Daniel Fisk, Network Rail Public and Passenger Health and Safety Manager for the Anglia route.

In total, Network Rail, on behalf of Greater Anglia, plans to equip 13 level crossings in East Anglia with RLSE cameras. The highest number of the devices will be installed in Norfolk and Suffolk. Two counties will get 10 RLSE cameras. They will be deployed in the following communities: Burston, Mellis, Moulton, Swainsthorpe, Tivetshall (in Norfolk) as well as Baylham, Bentley, Haughley, Palgrave, Stowmarket (in Suffolk). Three remaining points are Tendring and Braintree in Essex as well as Duxford in Cambridgeshire. “The work being undertaken will be of benefit to everyone as it will increase the levels of safety around our network,” said Matt Wakefield, Head of safety, security and sustainability at Greater Anglia.