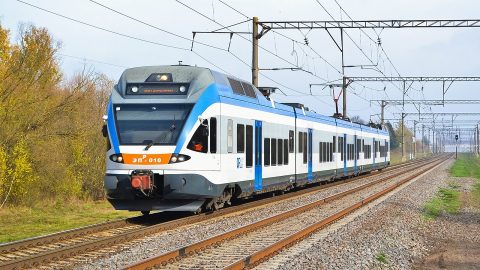 Belarusian Railway has completed the electrification of the first stage of the Zhlobin – Kalinkovichi – Barbarov line. The electric trains began to carry passengers from Minsk and Gomel to Svetlogorsk-on-Berezina since 21 June. The entire project will be accomplished by the end of 2021. In the coming years, the railway company is planning to electrify the 300-kilometre mainline between Kalinkovichi and Baranovichi.

On Saturday, 21 June, the first electric passenger train has arrived at the Svetlogorsk-on-Berezina station. This event indicated the completion of the first stage of the electrification project on the Zhlobin – Kalinkovichi – Barbarov line. As a result, the 36-kilometre section has been powered with the electric current. The remaining 105-kilometre part of the line between Svetlogorsk-on-Berezina and Barbarov will be electrified by the end of the next year. At the moment, the railwaymen are installing the support structures and are constructing the traction substations. After completing the electrification of the Zhlobin – Kalinkovichi – Barbarov line, Belarusian Railway will reduce the CO2 annual emissions by 900 tonnes.

Currently, the railway links to/from Svetlogorsk-on-Berezina are being served by two types of electric trains. The Flirt trains, which were manufactured by the Belarusian subsidiary of Stadler Rail, are running on the Minsk direction. There are two daily services between Svetlogorsk-on-Berezina and Minsk (via Zhlobin). The connections towards Gomel, the second-largest city in the country, are being performed by the ER9 modernised electric trains. When the Zhlobin – Kalinkovichi – Barbarov line will be completely electrified, the number of railway services will be increased while the rolling stock will be strengthened with the new trains. To this end, Belarusian Railway has already purchased 10 Flirt electric trains. 10 more units will be acquired by 2025.

The first electric train in Belarus was put into operation in December 1963 on the section between Minsk and Olekhnovichi, which is a part of the Minsk – Molodechno railway. In the coming 20 years, the overhead wires were installed on Olekhnovichi – Molodechno and Minsk – Osipovichi sections as well as on the Brest – Minsk – Orsha route that runs from Poland to Russia.

The electrification of the mainlines is still a key issue for Belarusian Railway during recent years. Within this policy, the electric traction was launched on 277 kilometres of the country’s railway network in 2016-2017. As a result, the Osipovichi – Zhlobin – Gomel and Molodechno – Gudogai – the Lithuanian border lines are served with electric trains and locomotives. Currently, the share of the electrified lines in Belarus is around 23 per cent. With the accomplishing the Zhlobin – Kalinkovichi – Barbarov project, this figure will increase up to 25 per cent.

Moreover, Belarusian Railway is planning to electrify the Kalinkovichi – Baranovichi mainline, which has a length of around 300 kilometres. It will be a key railway project in Belarus for the near future as it is vital for improving the railway services between the southwestern and southeastern parts of the country. According to the preliminary plans, the electrification of this route could start between 2021 and 2025. After its completion, the share of the electrified lines in the country will increase up to 30 per cent.