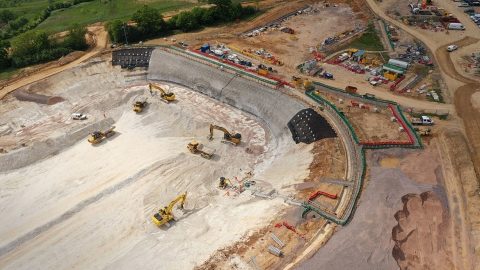 HS2’s contractors are carrying out the preparatory works on the launch site close to South Heat in Buckinghamshire. Next year, two boring machines will start to drill the 16-kilometre-long railway tunnels through the Chiltern Hills, northwest from London. It will be the largest construction site of the project.

It is quite busy at the South Portal Chalfont Lane site, near South Heath in Buckinghamshire. Here the construction of the Chiltern twin separate tunnels with five ventilation shafts will start in 2021. There are permanently 350 staff of Align Joint Venture, HS2’s main contractor that includes Bouygues Travaux Publics, Sir Robert McAlpine and VolkerFitzpatrick, and its subcontractors. They have already built slip roads from the London Orbital Motorway to the new site.

The launch site has an area of more than 550,000 square metres. It will be the largest construction of the boring project. South of the tunnel portal, the Colne Valley Viaduct will be built. It was designed by Align in a partnership with Jacobs, Ingerop-Rendel and the architect Grimshaw. The 3.4-kilometre-long installation will be the longest railway viaduct in the United Kingdom, it will carry HS2 across the Grand Union Canal and surrounding lakes. At the peak of the construction works of both tunnel and viaduct, around 1,200 people will be employed as well as 50 apprentices will be involved.

To dig 118,000 segments of the Chiltern tunnels, HS2’s contractors plan to use two boring machines. They are currently being manufactured by Herrenknecht in Germany. Each machine will have a weight of 2,000 tonnes and a length of 170 metres. After starting the drilling operations, they will work non-stop during the next 3.5 years, only making a few halts for Christmas and Bank Holidays. The planned tunnels with an internal diameter of 9.1 metres will be built at a depth of 80 metres. This will allow the nearby communities to avoid the impact of the future high-speed railway.