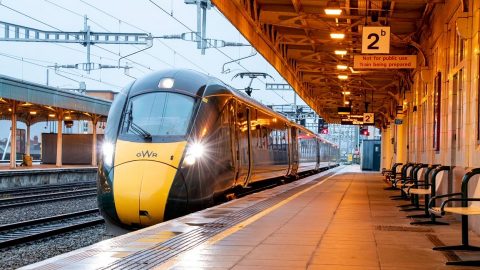 Travel from London to Wales now faster and greener

British infrastructure manager Network Rail has completed the electrification of the Severn Tunnel. As a result, the entire route between London and South Wales is powered with overhead wires. It allows the train operators to speed up their services and to make them more environmentally-friendly.

Starting from Friday, 5 June, the railway route from London Paddington to Newport and Cardiff has become entirely electrified. The works in the Severn Tunnel started almost four years ago, in September 2016. To this end, the train traffic in the tunnel stopped for some period several times. Afterwards, there was detected a form of anaerobic sulphur-reducing bacteria that corrodes the copper contact wires. As a result, Network Rail was forced to replace them with aluminium conductor steel-reinforced cables. The first electric train ran via the electrified Severn Tunnel in January. Now, the project has been officially completed.

“Electrification has reduced journey times between south Wales and London by as much as 15 minutes and provided an additional 15,000 weekday seats compared with a year ago, with the possibility of further increasing the number of services and seats from south Wales in the future. It has been a hugely complex task to electrify the tunnel but I’m thrilled that the final piece of the puzzle is now complete,” Mark Langman, Network Rail’s managing director for Wales and Western, noted.

The railway tunnel under the Severn Estuary was constructed in 1873-1886. It has a length of 7 kilometres and lies at a level of 3.6 kilometres under the river. Before opening the Eurotunnel beneath the English Channel, it was the longest railway tunnel in the UK. In the early 2000s, Network Rail started the modernisation programme of the Great Western Main Line, which includes the electrification of the Severn Tunnel. In the coming period, the UK Government plans to continue further electrification on other railways of South Wales.

“It is crucial that Wales has cutting-edge transport links to help people travel to work, encourage inward investment and better connect it to the rest of the UK in order to boost prosperity. As we seek to grow our economy once again, I look forward to continued collaboration with Network Rail to improve connections, cut journey times and create world-class transport infrastructure in Wales,” Secretary of State for Wales Simon Hart said.

This should read that the length of the tunnel that is under the river is 3.6km. The article reads that the tunnel is at a level of 3.6km below the river. That would be a very deep tunnel!