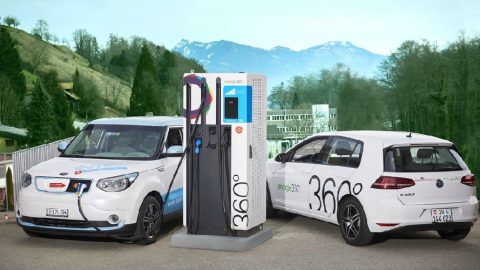 Swiss national railway company SBB has launched a new option for its customers. They are able to charge the electric cars at parking areas near train stations. At the moment, there are nine EV chargers at four locations.

The new option is being tested within the pilot project. SBB together with Energie 360​​° aim to determine the need for EV chargers among the passengers and the possibility for the future extension of the service. Therefore, four train stations have been equipped with nine EV charging points: four at Sargans station, two at Rapperswil and Mellingen-Heiterberg stations, one at Basel station. The latter facility provides a quick charge option. It also has a power splitting feature that allows charging two cars simultaneously.

“With the steadily growing number of registrations of electric cars, the need for publicly accessible charging stations is also increasing. As a sustainable transport company, SBB wants to offer its customers the opportunity to charge their electric cars while parking at the train station, making it easier for travellers to switch to an electric car. It thus promotes ecological, combined door-to-door mobility and contributes to climate neutrality, which SBB wants to achieve from 2030,” the Swiss railway company explained its decision to launch the pilot project.

The EV chargers were provided by Energie 360°, the Swiss company focused on this business. In order to use the new option, the customers need to download the ‘e-mobility’ application and register themselves with its help. After that, they are able to use the charging point of Energie 360° and its partners across Switzerland and Europe. The app provides information about the nearest EV chargers including those that were installed at train stations.