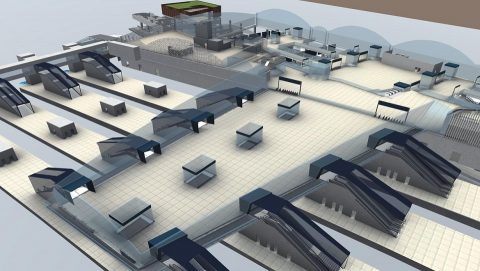 After Britain’s government had issued the ‘Notice to proceed’, the project of the high-speed railway to connect London, Birmingham, Manchester and Leeds set a new important milestone. This time, High Speed Two (HS2) Limited, the company responsible for developing the planned line, has launched the procurement to seek suppliers of lifts and escalators for four major new train stations.

HS Limited will purchase 168 lifts and 128 escalators to be installed across the future high-speed line. They will improve the accessibility of the new train stations in London and Birmingham. The longest escalators with estimated passenger traffic at 13.5 million people will be deployed at Old Oak Common, a new railway station in west London. This facility will be equipped with more than 50 lifts and escalators. All the lifts and escalators at the HS2 new stations should be energy efficient.

The entire procurement is valued at 465 million British pounds (around 533 million euros). It is divided into two separate packages for lifts and escalators, with the winners appointed to frameworks. This flexible approach allows for potential changes in the number of lifts and escalators ordered as station designs are finalised. HS2 Ltd plans to award the suppliers with the contracts next year. These agreements will include maintenance services for 20 years. “The launch of this landmark contract opportunity is a major step forward in the delivery of HS2’s four iconic new railway stations,” said David Poole, Procurement and Commercial Director at HS2 Ltd.