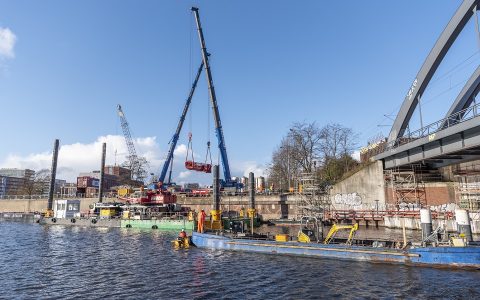 Three bridges to be replaced on Hamburg S-Bahn

Deutsche Bahn (DB) plans to demolish three old railway bridges on the Hamburg S-Bahn network. The new installation will be constructed instead of the Bille bridge by the mid-March, while the new facilities will replace the Bullerdeich and Billhorner Deich bridges by the end of 2022. DB will invest around 58 million euros in this renovation project.

All three bridges are located on the Berliner Tor – Rothenburgsort section of S2 and S21 lines of the Hamburg S-Bahn network. The replacement of the old Bille bridge will start on Saturday, 29 February, and will last until 15 March when the new 45-metre-long arch construction will be installed. This part of the renovation project costs at around 22 million euros.

At the same time, the preparatory works will be carried out on the Billhorner bridge. DB plans to install the new 25-metre-long steel bridge on this location by the end of 2022. The new Bullerdeich bridge will be installed also by the end of 2022 but the preparatory works are scheduled for the period between 3 and 10 March. Two latter constructions will cost around 26 and 10 million euros respectively.

As a result of the demolishing and preparatory works, the train traffic on Line S21 between Berliner Tor and Tiefstack will be replaced by buses and the trains running on Line S2 will be cancelled from 29 February to 15 March. The further traffic restrictions will be reported later.

Demolition of the Bille bridge

The Bille bridge across the river of the same name was constructed in 1902. Gustav Seeland, the Hamburg-based provider of heavy goods logistics services, will demolish this installation in a three-day period. To perform the project, the company workers will split it into three sections. Afterwards, these elements will be loaded onto floating pontoons with the help of a 500-tonne crane firmly attached to a pontoon.

“Hydraulic supporting pillars will be used to secure the load and bolster the pontoon, thus stopping the floating crane pontoon from rocking and capsizing under the weight of the load,” the company noted. Gustav Seeland will also deploy two special cranes, each with a load-bearing capacity of around 220 tonnes, and a 60-tonne brake car with a tractive force of 80 tonnes. After loading the sections of the old bridge onto the floating pontoons, they will be towed to the Port of Hamburg for scrapping.

Are you interested to know more about the German rail sector? To this end, ProMedia will carry out RailTech Infra Forum 2020. The event will take place in Frankfurt on 16-18 June. Find more information about the conference on the event website.