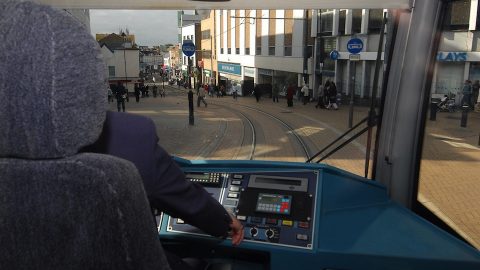 Desire for trams on track in Britain

The tram is making a comeback in the UK. After two decades of stalled development and unrealised plans, rails are being laid and systems extended in several cities. High Speed 2 may be taking the headlines, but it is High Street that is seeing rails laid and people moving.

Leading the way, and the envy of many local authorities in Britain and elsewhere in Europe, the conurbation of Greater Manchester has once again delivered expansion to its extensive Metrolink network. Opening in April, fully seven months ahead of schedule, the new Trafford Park Line will serve an industrial area of over 1,300 businesses, and the huge Trafford Centre shopping mall, which is currently often gridlocked by road traffic which hampers much of Manchester’s motorway network.

Mayor of Greater Manchester, Andy Burnham, said the new line demonstrated a track record of delivering major schemes on budget and ahead of schedule. “There is no doubt it is a blueprint for how Greater Manchester could run other transport systems in the future and represents a key step forward on our journey towards a more integrated, London-style transport system.”

The capital is not far behind. The southern London administrative borough of Croydon is served by the next busiest street rail system in the UK after Manchester. The 28-kilometre system carried 28 million passengers last year. The operator, Transport for London is currently consulting over the Sutton Link – a pair of extension lines through Wimbledon, which will ace the congestion around the commercial centre of SW19.

Authorities in Glasgow, which already has the biggest heavy-rail system outside London, have recently commissioned a plan for a radical integrated transport network, based on light rail. The city is looking at bringing back part of the city’s former tram network, and providing a link to the airport.

In the other central Scottish city of Edinburgh, the controversially expensive single tram line is currently being extended by 4.6-kilometre into the north of the city. However, with almost all of the extension street running, the three-year construction project is already proving unpopular with residents and businesses affected.

There has also been criticism of the conventional overhead wiring in the world heritage listed city centre. Unlike Bordeaux, Edinburgh’s trams do not have the installed capability to run on ground level power. In Birmingham however, views of Brindley Place and Centenary Square will remain uncluttered, in the same way as the French city. The West Midlands Metro is currently being extended through the centres of Wolverhampton and Birmingham, with plans in place to link up with HS2 stations. In Birmingham High Speed Two will be connected to the High Street too, and the connection will be by tram.