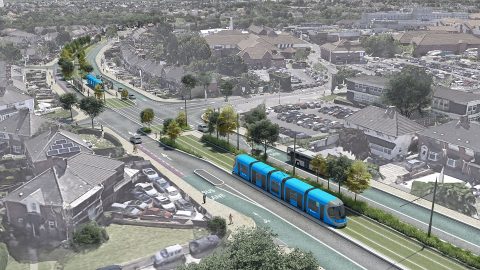 The authorities of the West Midlands metropolitan county plan to invest around 18 billion euros in multiplying the local light rail system. According to the declared programme, the West Midlands Metro network will be extended from the current 21 kilometres to 263 kilometres in 2040. This means that the public transport system will be increased by more than twelvefold.

At the end of 2019, the West Midlands Metro has appeared in the news headlines due to its innovative tram extension. In the mid-December, the new catenary-free section, the first one in the United Kingdom, was launched. Now, the mayor of the West Midlands Andy Street declared another innovation. On Tuesday, 4 February, he unveiled the extension plan for the light rail network in the metropolitan county. “In recent years, we have made great progress… But now is time for the next stage of ambition,” he said at the presentation.

Indeed, the mayor’s plan is ambitious. By 2040, he wants to construct eight new lines and approximately 380 new stops on the West Midlands Metro network. Besides them, Andy Street has an intention to build 21 new railway stations in the county. The estimated value of this huge project is 15 billion British pounds (around 18 billion euros) or 750 million pounds (around 900 million euros) a year during the 20-year period. As a result, the 21-kilometre West Midlands Metro system will get 150 miles of new lines (around 242 kilometres) and will become similar to London’s Tube network. However, Street has not mentioned the sources to fund this enthusiastic plan. “No idea if funding it is even remotely plausible, but dreaming big is good,” the CityMetric title noted.

Besides the funding, Street needs to win in the upcoming mayor elections to take place in May. Meanwhile, there is another handicap. The infrastructure projects require much more time than the politician think. And the West Midlands Metro network confirms it. For instance, the Planning Inspectorate granted permission for the 1.7-kilometre extension from Bull Street to a new terminus at High Street Deritend at the end of January. It will provide the connection to the planned HS2 train station and will serve the Eastside regeneration area in Birmingham. Despite it, the project terms have not defined finally yet. And the key question is still without answer: what is the fate of the HS2 long-pending project?