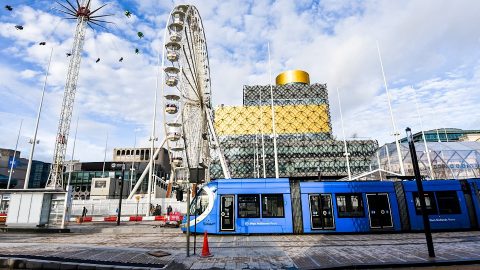 Tram network in Birmingham has been extended with a catenary-free section from Birmingham New Street station to the city hall and library. It is the first tram line in the UK without overhead wires. The new extension is served by the battery-powered trams.

Despite the new section includes only trams stops, Town Hall and Library, it is of great importance for West Midlands Metro network. First, it sets a milestone because it is the first wire-free tram line in Birmingham and the UK. And, second, the new section provides direct access to the passengers to the frequented locations in the city centre. “We are offering people a convenient, fast and reliable service direct to some of Birmingham’s premier visitor attractions as well as the key office developments springing up around Centenary Square,” noted Laura Shoaf, managing director of Transport for West Midlands (TfWM).

The new two-stop section is a part of Westside extension, it is also known as Westside Phase One. Its construction started in June 2017 and has been completed two weeks ahead of schedule. Now, TfWM together with the Midland Metro Alliance (MMA) is planning to continue the civil works on the Westside Phase Two. The latter also requires two years to be finished in 2021. The Westside Phase Two section will have three stops: Brindleyplace, Five Ways and Edgbaston Village. At the Five Ways tram stop, the passengers will be to take a train to Lichfield or Redditch. The entire Westside extension costs 149 million pounds (around 177 million euros).

In order to serve the catenary-free section, Spanish rolling stock manufacturer CAF has refurbished 21 Urbos trams running on the West Midlands Metro network. All the vehicles were equipped with batteries. The conversion from the conventional trams to the bi-mode trams with batteries has been performed for less two years. In early October TfWM ordered an additional batch of battery-powered vehicles. This time CAF will also supply 21 Urbos trams. As a result, the current fleet running on the West Midlands Metro network will be doubled up to 42 units.