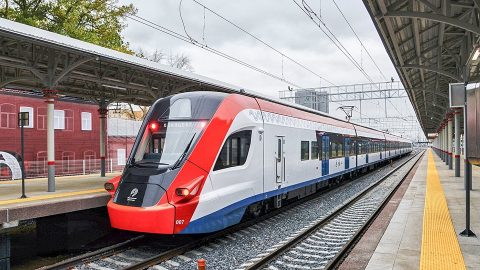 The capital of Russia has got a new rail transit system known as Moscow Central Diameters (MCD). Its two routes have been launched on Thursday, 21 November, in order to connect different parts of Moscow metropolitan area. Three other lines will be open by 2024. The new rail system is similar to the German S-Bahn networks or French RER lines.

Two MCD lines have been opened for the passengers at 05:30. They will have the same schedule as Moscow Metro and will work until 01:00. The MCD-1 route (or Line D1) crosses the Moscow metropolitan area in the south-west direction and connects the stations of Lobnya and Odintsovo. At the same time, the MCD-2 route (or Line D2) runs in the east-south direction connecting the stations of Nakhabino and Podolsk. Both lines have a total length of over 130 kilometres and consist of 57 stations that are linked with Moscow Metro. The MCD-1 line also provides a connection with Moscow Monorail. Due to the transport system has been included into the Moscow city transit system, the passengers are able to buy the joint tickets for travelling by MCD and Moscow Metro, buses or other types of land city transport.

The MCD lines are operated by Central Suburban Passenger Company (CSPC). It is the largest regional passenger carrier in Russia and focused on serving the commuter railway routes within the Moscow metropolitan area and to nearby regions. Initially, it was established by Russian Railways (RZD) together with authorities of Moscow and Moscow Region. Afterwards, RZD sold its stake. Now, it is owned by private companies and the Government of Moscow Region (the latter has a stake of around 13 per cent).

According to the development plan, the entire network of Moscow Central Diameters (MCD) will consist of five lines. Two routes, Line D3 (Zelenograd-Ramenskoye) and D4 (Aprelevka-Zheleznodorozhny), will be launched by 2021. The fifth link, Line D5 (Pushkino-Domodedovo), will be open in 2023-2024 (see the map above). After implementing this plan, the MCD network will have a total length of 381 kilometres and consist of 186 stations. Most of the train stations will be commenced on the basis of the existing facilities while some of them will be constructed from the ground. All the MCD lines are based on the existing but upgraded railway lines of the Greater Ring of the Moscow Railway. Another feature of the transit system is its integration with other modes of transportation. This will improve the connectivity within the Moscow metropolitan area.

The MCD network is served by the Ivolga electric trains (‘Oriol’ in Russian) with an interval of 5-6 minutes. After launching the entire system, they could carry up to 334 million passengers per year. This type of rolling stock has been developed by Tver Carriage Works (TVZ), a subsidiary of Transmashholding. The first Ivolga train was assembled by TVZ in 2014 while the second unit was produced in 2015. Both vehicles consist of five coaches, they were purchased by CSPC in 2016. Two years later, in 2018, the railway company concluded two contracts with TVZ for supplying 39 Ivolga trains (24 six-car and 15 seven-car units). They were ordered specially for the MCD lines. Currently, the train fleet of CSPC includes 34 Ivolga vehicles including two five-car units.

Fascinating. Are any of these Diameter lines tunnelled? The article implies that they are not, and use existing railway lines.

There are no tunnels, only above-ground lines