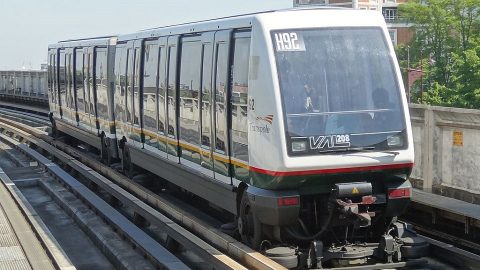 The first automated metro line in the European Union was launched in the French city of Lille in 1983. Initially, it consisted of 12 stations. Since that time, Lille Metro has been developed significantly. Now, it includes two fully automated lines with 60 stations. The technology for Automatic Train Operation (ATO) in Lille is based on automatic rubber-tyred people movers. It was designed by French company Matra Transport International and also known as Véhicule Automatique Léger (automatic light vehicle, or VAL).

Afterwards, this technology became popular in France. Besides Lille, the VAL solution was implemented in Paris (Orlyval service), Lyon, Toulouse and Rennes. In the 1990s Matra Transport International developed the communication-based train control technology for automated metro lines – Trainguard MT CBTC (now it belongs to Siemens Mobility). It was deployed in Lyon Metro (Line D) and Paris Metro (Line 1 and 4). Also, this solution was installed in other European countries including Germany (Nuremberg U-Bahn), Spain (Barcelona Metro) and Hungary (Line 4 of Budapest Metro).

During the next decade, Italian engineering company AnsaldoBreda (now Hitachi Rail Italy) has been developing its own technology for automatic metro operation known as AnsaldoBreda Driverless Metro. Its other name is the Denmark Hitachi Rail Italy Driverless Metro due to the capital of Denmark as the first location of installation. Besides Denmark, it is popular in Italy, the company’s home market. Four Italian cities Milan, Rome, Brescia, Turin use this solution in their own metro systems.

In the German city of Nuremberg, the deployment of ATO technology in the 2000s led to an uncommon case. A major section of automated Line 3 (U3) is going parallel and close to the conventional route of Line 2 (U2). For several years, the automated trains were running on the network of Nuremberg U-Bahn (Metro) simultaneously with the conventional manned vehicles. By 2010, Line 2 was finally converted to the automated one. The solution for Line 3 and Line 2 was supplied by Siemens Mobility. “We have also initiated, for the first time worldwide, mixed operations with automated and driver-operated metros on the same route, making us forerunners in applying digital technologies,” said Sabrina Soussan, CEO of the German technology supplier.

The deployment of ATO solutions in the EU cities is developing constantly. Currently, there are three lines under construction in Paris Metro, two more routes are being planned for conversion from conventional to automated by the mid-2020s. The metro network in Rennes will be extended with the second automated line next year. At the same time, several other EU states could enlarge the list of countries with automated metros. Recently, the Dutch city of Rotterdam announced the intention to implement the ATO technology on the busiest section of its metro network. The other Dutch metro system, in Amsterdam, could also start to operate the automated trains in future. However, these ideas are only under consideration. The Irish capital of Dublin is also planning its own driverless metro network.

Two other EU countries, Czechia and Greece, are constructing the future automated metro lines. This summer, the civil works were launched in Prague. By 2027, it is expected that the Czech capital will receive Line D, the first driverless route in the city. Meanwhile, Greece, on one hand, is planning to construct the new line in Athens Metro (Line 4) that will be fully automated. On the other hand, it is trying to complete the long-pending project of Thessaloniki Metro that will be equipped with the unmanned technology of Hitachi Rail Italy. The construction works started in Thessaloniki in 2002 but they have been postponed several times. Initially, the metro network was scheduled to be launched by 2012, then by late 2020. In October of this year, the Greek Prime Minister Kyriakos Mitsotakis named another date – April 2023.

You’re right. However, it is considered to be a light metro or sometimes a light rail. That’s why I didn’t include it. In the UK, there are also automated people movers in the airports that are also very similar to metro lines. Next time, it is worth to write about the UK solely. Thank you for the remarks!