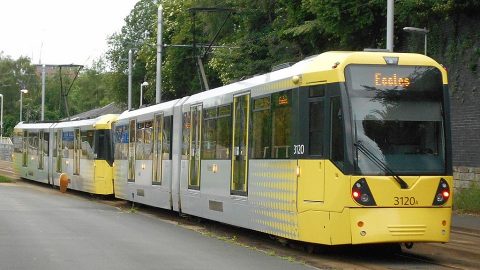 Britain is shopping for trams

The United Kingdom’s biggest tram network is about to meet the country’s biggest shopping centre. Well, almost. Manchester’s Trafford Centre is the third biggest retail mall in the UK, but there’s no ambiguity about the scale of the Metrolink network which, at nearly 95 kilometres, is three times bigger than any other in the country.

It seems no time at all since the Manchester Airport extension and the opening of the Second City Crossing. Such is the pace of change here that it has in fact been five years and two years respectively, and the change continues. The biggest road traffic generator in the north of England is nearing connection.

Civil engineering on the Trafford Park Line is almost finished and, although passenger services on the 5.5-kilometre route will not start for several months, completion of major works will be a welcome Christmas present for tenants on the vast Trafford Park industrial estate, and even for the fictional residents of Coronation Street. The hugely popular soap opera is filmed at dedicated studios served by the new line. The opening titles have long since featured a Metrolink tram, now a real one will have a starring role.

History and the Future

As late as the 1950s, any UK municipality of note had a tram service. Only the resort of Blackpool was far-sighted enough to retain its seaside line, and while that one remains as popular as the Kusttram in Belgium, the twenty-first century is proving a second coming for modern streetcars.

Nottingham in the English Midlands and the south London borough of Croydon both have mature systems of around 30 kilometres each. Nottingham Express Transit is growing in several directions, including a link to the planned HS2 stop on the edge of the city. That programme of expansion has been partly funded by a controversial levy on workplace car parking. However, the trams themselves have been a hit since opening in 2004. The unheralded Croydon Tramlink (now branded London Trams) provides a vital public transport service, which went largely unnoticed, except for a tragic accident in 2016 which killed seven passengers – the first such fatalities in the UK since 1959.

Despite the Croydon crash, safety has never been neglected in UK tram development, even when that has meant lengthy delays. It was only after ten years of consultation and trails that Sheffield’s Supertram network was augmented last year by Britain’s first ‘tram-train’, connecting with the adjacent town of Rotherham.

Budget not safety almost killed off Edinburgh’s hugely expensive and controversial line. The billion-euro project doesn’t share the sophistication of Bordeaux’s wireless cruise through its World Heritage city centre, but it is now being extended to serve the Scottish capital’s northern suburbs. Birmingham, where testing is underway, has opted for battery power instead of a battery of wires for its city centre extension. Even venerable Blackpool runs sleek Bombardier Flexity 2 trams alongside heritage double-deck vehicles on the recently extended service that carries over five million passengers annually.

Meanwhile, Manchester has embraced rail-borne rapid transit like no other. With a network almost as extensive as ‘tram-town’ Bremen, the metropolitan region is an excellent case study in repurposing disused and under-used heavy rail into very popular modern light rail solutions. Even after the Trafford Park Line opens, there is a list of ambitious further projects on the table. They include following Sheffield’s lead on tram-train operations and taking that to a whole new level. At least four routes have been identified, bringing outlying boroughs on to the metro network.

There may not be a stop for fictional Weatherfield, but ‘Change here for Coronation Street’ will soon be the announcement on Trafford Park services. Metrolink in Manchester and trams in the UK, in general, seem to have as many fans as their new soap opera customers.