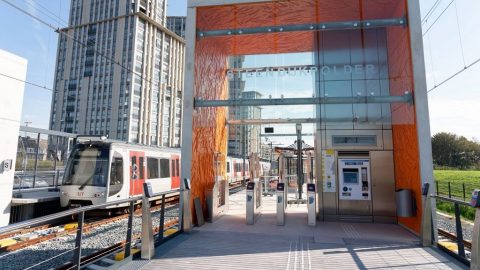 Four-track train traffic between Leiden and Dordrecht, light rail corridors in The Hague, southern part of Rotterdam and from Zoetermeer to Rotterdam as well as a partly automated metro in Rotterdam. All these moves must ensure a scale leap of public transportation in a period between 2025 and 2040 in the Rotterdam The Hague Metropolitan Area (MRDH). These plans will be the next stage in developing the better connection inside the agglomeration after the recent launch of the new Hoekse Lijn extension of Rotterdam Metro.

After the month-long initial phase that started on 30 September, the extended Line B of Rotterdam Metro has been officially opened on 1 November. “The metro was used eagerly from day one. On weekdays, we count on average more than 24,000 check-in and check-out users, and have already calculated 700,000 check-in and check-out users since the start,” said Maurice Unck, director of RET, to SpoorPro, the sister title of RailTech.

According to Marc Rosier, public transport development portfolio holder of the Rotterdam The Hague Metropolitan Region (MRDH), it is highly necessary to further expand the metro network. “We are happy that the extended metro line B is now running. You can see that the metro fills up immediately. In this way, we are responding to increasing demand for fast and good public transport in the metropolitan area. The success of E-line also illustrates this: since the start of the metro line, the number of boarders per working day has risen from 6,000 to more than 45,000 now.”

“The population of the metropolitan area will grow strongly in the coming decades,” Rosier expects. “The number of people who arrive here is comparable to the number of residents of Utrecht. This requires more housing, more employment and better accessibility. Significantly more people will soon have to be transported, while public transport and roads are already filling up.”

Unck adds: “Investing is necessary from both a spatial and economic perspective. Parties such as OESO, IMF and VNO-NCW have repeatedly called for this. The faster the better, because before a new line arrives, you will soon be ten years further. The national budget is in good shape, so the money is there. It only needs to be allocated to public transport projects. ”

An important ambition of the Rotterdam The Hague Metropolitan Area is to implement four-track train traffic between Leiden and Dordrecht, making high-frequency transport possible. There is also the desire to introduce a new metro loop from Rotterdam’s Kralingse Zoom metro station via Rotterdam-Zuid to Rotterdam Centraal station and to make it possible to drive automatically on the Rotterdam metro network. Earlier Maurice Unck told to SpoorPro that automatic driving will only happen on a busy part of the network.

Since 1 November, the start-up phase of the Hoekse Lijn has been over and the rush-hour journeys to Vlaardingen West were added. Thanks to them, the metro trains run every five minutes on that part of the line during rush hour. In addition, bus transport in the region is being adjusted. “With that, travellers in the municipalities along the former Hoekse Lijn finally have the public transport quality that they have had to wait for so long,” said Unck. “The great added value is the connection to the Rotterdam metro network. We see that reflected in the figures: most travellers have a final destination near one of our stations.”

The last station on the metro line, Hoek van Holland Strand, will be located right next to the beach. The construction is still being prepared. Alderman Arjan van Gils of the Municipality of Rotterdam: “When the last track is finished in 2022, the region will have 25 kilometres of metro tracks and a unique metro station in the dunes.”