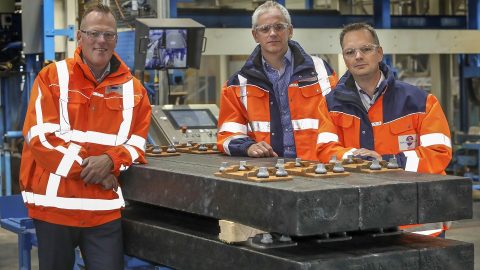 KiwiRail chose the Lankhorst-made plastic sleepers due to the high quality, long life span (more than 50 years) and good level of noise reduction. It will install them on mainlines and turnouts. The delivery will be provided by Link Asia Pacific (LinkAP), a technology and marketing company based in Brisbane, Australia. LinkAP is also the Lankhorst’s agent in Australia and New Zealand. The company has organised several presentations to various Australian and New Zealandic infrastructure managers, railway operators and contractors that resulted in the firm order.

“This is the significant breakthrough,” Lankhorst stated. Oceania is a new region in the company’s geography of business. The Dutch manufacturer has already supplied its plastic sleepers to the customers in the domestic market (the Netherlands) and in various countries of Europe such as Belgium, France, Austria, Germany, Sweden, Switzerland and the United Kingdom. Also, it has a few contracts in other continents: Africa (Gabon), Asia (Malaysia) and North America (Mexico).

Lankhorst Engineered Products manufactures the plastic sleepers under the KLP brand, a name used for the Lankhorst’s products made from recycled plastics. The entire product name is KLP Hybrid Polymer Sleepers. Lankhorst produces its sleepers from high quality, ductile polymer reinforced with two inside steel bars. Such technology allows the company to make the sleepers more rigid and strong.

Also, the recycled sleeper was designed to maximise the lateral and longitudinal resistance in the ballast whilst using 30 per cent less plastic than is used in a solid sleeper. All types of Hybrid Polymer Sleepers have been developed to install on urban, regional or industrial railways. For over a decade, the Lankhorst-made plastic sleepers are being used in the Netherlands. The product was introduced to the international market in 2014.