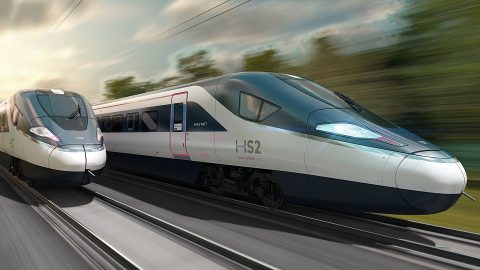 The biggest infrastructure project in Europe is on hold, and that’s official. Britain’s controversial HS2 – the high speed rail line between London and Birmingham – is already under government review, and is now at least five years late and a staggering 20 billion Pounds (22 billion Euros) over budget.

Amid the current political turmoil of the UK parliament, Grant Shapps, the recently appointed Transport Minister, delivered a report to the House of Commons, saying that he wanted the House to have the full picture. “There is no future in obscuring the true costs of a large infrastructure project – as well as the potential benefits,” he said. That was met with some distain, as politicians up and down the country have already been made acutely aware of the full picture by their constituents.

Were it not for the all-consuming debate on the UK’s future in Europe, the state of the HS2 project would undoubtedly have brought a scandalous reaction. As it stands, the admission that the ten-year build is five years late and now estimated to cost at least 81 billion British Pounds (89 billion Euros) has been pushed off the front page already.

Although the project will relieve pressure on the very busy West Coast Main Line, which is anchored at London’s Euston station and links most of the UK’s biggest cities, critics have said it is the wrong answer to the right problem.

Those in the south of England, who are opposed to the building of the route through unspoilt countryside, say that the benefits will be marginal. The expected travel time for the 120 miles (192 kilometres) between London and Birmingham will be reduced from an already rapid 1 hour 20 minutes to around 52 minutes.

The real benefits will be for longer distance journeys, particularly to Manchester which is almost twice as far away. Sleek new HS2 trains will pull into a brand new Mayfield Station in Manchester just 67 minutes after leaving a rebuilt London Euston, fully an hour faster than today’s expresses, which already run every twenty minutes from morning until night.

However, critics in the north of England, particularly Andy Burnham, Manchester’s outspoken mayor, have consistently complained that the project is being planned in stages, with no economic benefits for their region for at least a decade. Now, even the most optimistic estimates say that cities like Manchester, Liverpool and Leeds will not see their high-speed sections completed before 2035.

The government in London says that HS2 will rebalance the economy of the UK, bringing development and jobs to the North. However, they have already claimed that HS2 will bring tens of thousands of jobs to London, while remaining vague about the benefits for other parts of the country. Lobbyists outside London say if the economy of the North is a priority, the line should be built from the North downward, towards London.

Operationally though, the most pressing problem is lack of capacity on the London – Birmingham section, where local passenger services and freight paths are already at a premium. That has raised further criticism, suggesting that the line should be engineered as a relief line, and the high speed element is a huge and irrelevant expense. Few commentators believe that even the revised timescale and budget can be met.

Although off the headlines for now, the publication of the government-sponsored review, due before the end of the year, will catapult HS2 back into the limelight. Meanwhile, there’s a long wait for that first train and cancellation is a distinct possibility. That would leave no answer to that big problem.