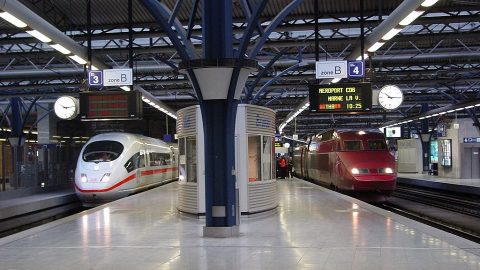 Modernisation of busiest railway line in Belgium draws to close

In order to accomplish the modernisation project as soon as possible, Infrabel intends to engage up to 300 employees. They will work 24 hours a day, 7 days a week. The rail infrastructure manager will upgrade the signalling system on the south side of the Brussels-South station. It will replace the old, 50-year-old system with a new, modern one. “These works are crucial to guarantee safe train traffic and a reliable rail network for our customers. Moreover, this is an essential operation to install the European safety system ETCS on the busiest railway line in the country,” Infrabel stated.

Approximately 1,200 trains run via the corridor between Brussels-North and Brussels-South stations every day. This line is very popular among the commuter passengers arriving in Brussels from the surroundings by train. The modernisation works will have a great impact on the P-trains running during the rush hours. The Belgian national rail operator NMBS/SNCB has already cancelled 46 trains for the period from mid-October to mid-November. Both Infrabel and NMBS/SNCB are looking for solutions to provide the alternatives for other 58 trains.

At the same time, Infrabel noted that the works will be performed during the school autumn holidays (from 26 October to 3 November). Also, this period includes two extended weekends: 1-3 and 9-11 November. It will help the company to reduce the negative impact on the passengers.

The planned works on the railway corridor between Brussels-North and Brussels-South stations are the last stage of the Infrabel’s ambitious project launched in 2014. The company is performing it into several phases. The first stage was in 2014 when the rail infrastructure manager provided the track maintenance works only at night or during the weekends. The second phase included the modernisation of the signalling system on the north side of Brussels-South station. It was performed during one extended weekend with a total traffic interruption.

Thank you, Teo, for your remarks!