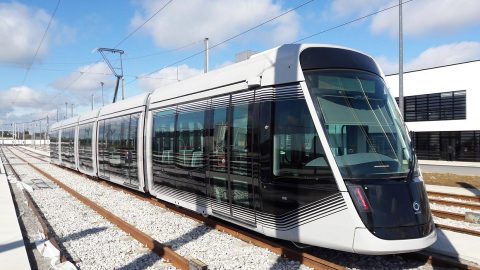 French urban community of Caen La Mer has launched a 16.2-kilometre tram network. It replaced the guided bus service that was being functioned in the city for 15 years. The conventional tram network is served by the Citadis light rail vehicles supplied by Alstom.

The Caen tram network was opened for the passengers on Saturday, 27 July. It consists of three lines converted from the guided bus routes and 37 stations. The conversion started at the end of 2017, it took more than one year. The conventional tram network is owned by the urban community, it is operated by Keolis Caen, a local subsidiary of Keolis Group.

Before launching the conventional tram network, the community of Caen La Mer was operating the Caen guided light transit for more than 15 years – from November 2002 to December 2017. The system was served by a the rubber-tyred trams, one of the type of the guided bus services. These vehicles ran on the tyres but had a guide rail and used a catenary like the ordinary trams. The rolling stock and technology for the network were supplied by Bombardier Transportation. The similar technology is still in operation in another French city of Nancy. It will be converted to the conventional tram network by 2023. It is worth to note that Alstom is also developing the rubber-tyred trams known as Translohr. This type is served the city routes in France (city of Clermont-Ferrand, Île-de-France region), Italy (Mestre, Padova), Colombia (Medellin) and China (Tianjin, Shanghai).