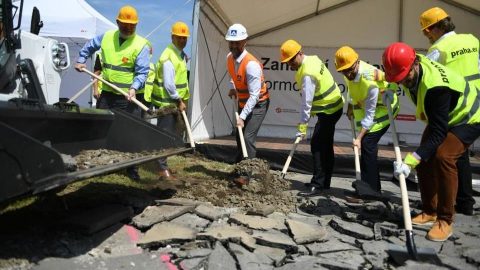 The city authorities of Prague have inaugurated the construction works of the fourth metro line. It is expected to be completed in eight years. The estimated cost of the project is 70 billion Korunas (more than 2.7 billion Euros).

The official ceremony was held with a presence of city mayor Zdeněk Hřib, his deputy for transport Adam Scheinherr, CEO of Prague Public Transit Company (DPP) Petr Witowski and CEO of Metrostav Pavel Pilát last week. They removed the road surface in the Pankrác area (the city centre) where the planning line will run. “After the years of discussions and planning, we started today a geological survey of metro D, i.e. the actual construction of the fourth line of the Prague Metro,” said Petr Witowski. The geological survey will take until July 2021.

Line D will consist of nine stations and connect the city centre with the southeast neighbourhoods. It will start from the existing station of Náměstí Míru (The Peace Square) of Line A. This station will be an interconnection hub for passengers. The route will be also linked with Line B at Olbrachtova station and with Esko Prague network, the S-Bahn-like commuter network, at Praha-Krč station. The project will be carried out by Metrostav, the contractor that is specialised on the construction of metro lines and includes the erection of a train depot in the Písnice area. According to Petr Witowski, Line D will be served by the driverless trains.

The Prague Metro was opened in 1974 with launching Line C. Two other routes, A and B, started to serve passengers in 1978 and 1985 respectively. The 65-kilometre network has 61 stations. Two types of rolling stock are served the metro lines in Prague. The type 81-71M was originally manufactured in the Soviet Union by Mytishchi Machine Works (now Mytishchi Machine Works) in the 1970s and 1980s as type 81-717/714, it was modernised by Czech companies Škoda Transportation and ČKD in the 1990s – 2000s. The 81-71M trains run on Line A and B. The third route, Line C, is served by the Metro M1 vehicles manufactured by a consortium of ČKD, ADtranz and Siemens.