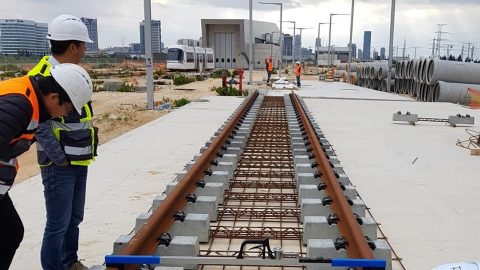 German railway equipment supplier Vossloh Group is taking part in the construction of the first light rail route in Tel Aviv. The company delivers the rail fasteners, switches, and chamber filling elements for the future tram route. The Tel Aviv Light Rail is scheduled to be opened in 2021.

The first light rail route in Tel Aviv, commonly known as the Red Line, will connect two cities of the Tel Aviv Metropolitan Area: Petah Tikva and Bat Yam. The line will have 23 kilometres long and include 33 stations. The Petah Tikva – Bat Yam route will cross via Tel Aviv Savidor Central railway station. It will provide passengers with a good connection to the country’s train network.

The development project of the Tel Aviv tram network suggests the construction of four routes. The construction of the Purple Line was launched in December 2018. It will be completed by 2024. The line will connect Tel Aviv with the cities of Yehud, Or Yehuda, Ramat Gan, Tel Aviv, Kiryat Ono, Giv’at Shmuel.

The other link to be opened in 2024 is the Green Line. Its construction is expected to start this year. The route will provide a link between the core of Tel Aviv with the adjacent cities of Rishon LeZion and Herzliya as well as to the northeastern neighbourhoods of the Israeli capital. Also, the fourth line (Brown) is being planned. It is worth to note that the Tel Aviv Metropolitan Area has more than three million inhabitants that are about 45 per cent of the total Israeli population.

The Tel Aviv Light Rail will be the second tram network in Israel. The first one is the Jerusalem tram network launched in 2011. It has only one 14-kilometre route with 23 stations. The city authorities plan to extend the network with three new lines. The rolling stock for the Jerusalem Light Rail was supplied by Alstom. The system is served by 46 five-section units of the Citadis 302 type.