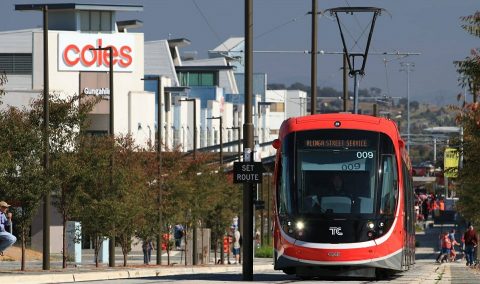 Australian capital city of Canberra has launched the first tram line. The 12-kilometre route with 13 stops connects the city centre with the northern district of Gungahlin. Canberra became the sixth city in Australia to operate the tram service.

The preview presentation of the tram service took place on 18 April. The official launching ceremony was held two days later, on 20 April. The tram travel was free of charges during the Easter weekend – on 20-21 April. The light rail service together with the city buses will be also free from 29 April till 28 May.

The Canberra light rail network is served by 14 Urbos 100 trams. The five-section units with 33 meters long were produced by CAF. The first vehicle was supplied on December 2017. The Urbos 3 trams are low-floor and bidirectional, they have 4 doors per side. The vehicles are also capable to carry bikes and wheelchairs.

The construction works have been started in July 2016 and are still going on. The contractors should accomplish to apply asphalt to remaining intersections, landscaping and installing some kerbs and footpaths. The consortium ‘Canberra Metro’ will operate and maintain the tram network for 20 years.