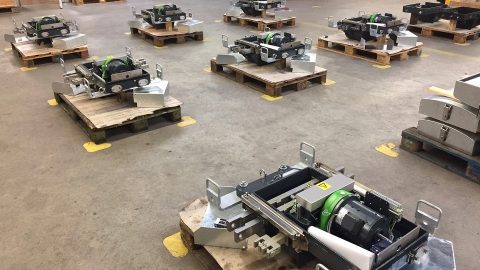 Besides the point machine, Voestalpine WBN will also supply the 1:15 manganese steel frogs. Earlier, the company delivered only the 1:9 manganese turnouts. The use of manganese switches was implemented by ProRail regulations. The Dutch railway infrastructure manager considers them as more effective and sustainable in terms of lifespan.

Currently, Voestalpine WBN works over developing a new type of point rod. The company tries to create a new product requiring less maintenance. “We were asked to create a point rod that does no longer have to be periodically lubricated and that is easy to adjust,, noted the company’s product manager Daniël Poll Jonker. According to him, the first results of the project will be reported this summer.

Voestalpine WBN, a part of Voestalpine VAE Group, is specialised in manufacturing way components and turnouts. The company has been working on the Dutch railway market since 1893. It extended its business to the expertise on switch motors and rods due to an acquisition of another Dutch railway supplier Rail Service Nederland. The new point machine and manganese steel frogs are the results of this merger.