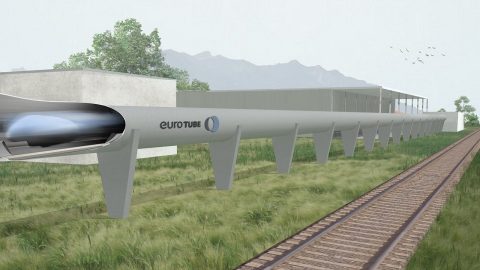 Switzerland will become the first European country to test the Hyperloop technology. Non-profit research institute EuroTube together with Swiss Federal Railways (SBB) and canton Valais will construct the three-kilometre trial track. The works are expected to start in the second half of 2019.

The test track section will be set up in the Collombey-Muraz commune of canton Valais, Southern Switzerland. This location was chosen due to its geographical conditions, especially the smooth terrain. The project participants want to speed up a hyperloop train to 900 kilometres per hour.

“EuroTube provides a research platform with the goal to pursue fundamental research as well as develope technologies for future commercial applications in the field of ultra-high-speed vacuum ground transportation. In collaboration with SBB and the Canton of Valais in-depth feasibility and environmental impact studies are being carried out on the site”, EuroTube reported about the goals and practical importance of the project.

By announcing the project, Switzerland joined the list of European countries that intend to construct a hyperloop route on its territory. The first attempt was made by Slovakia in 2016. The local government signed a deal with Hyperloop Transportation Technologies to perform a feasibility study for the implementation of a vacuum train from Bratislava to both Vienna and Budapest. A year ago, Hyperloop One, another developer of the technology, proposed to construct an undersea vacuum connection between Tallinn and Helsinki.

This year two European countries announced their plans for setting up a hyperloop train on their territories. In February, several Ukrainian technology companies established a HypeUA consortium for researching and developing a hyperloop. Ukrainian Ministry of Infrastructure was also attracted to the project Hyperloop Transportation Technologies. Another state that expressed a willingness to construct a hyperloop route was Spain. Its rail infrastructure manager Adif concluded a deal with Virgin Hyperloop One on establishing of a vacuum track section in outskirts of Malaga.

Thank you for this article. But why do not you allude to the two projects in France?
– Transpod (Canada) : Droux in Haute-Vienne (West of France)
– HTT (USA) : Toulouse.