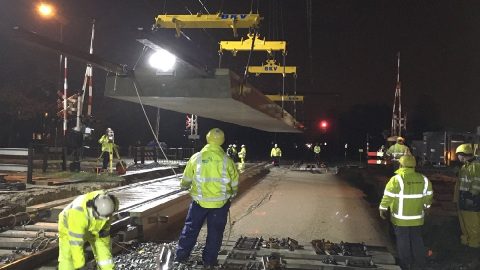 Strukton Rail has installed a 95-tonnes concrete level crossing in the Dutch city of Apeldoorn. It was manufactured by voestalpine Railpro and Spanbeton. The crossing concrete plate is one of the heaviest ever installed in the Netherlands, comparable with the weight of 95 passenger cars together.

The 27-metre concrete level crossing is located on the Avenue of Spitsbergen. The new plate was installed by cranes within moments, as if it were a puzzle piece. This technology allows reducing construction time, which can take between eight to ten hours. “This saves a lot of work and provides enormous time savings. Rail traffic resumes quickly”, voestalpine Railpro reported.

The largest concrete level crossing ever was installed on 25 March 2012 in the municipality of Zoeterwoude. It consisted of two concrete plates, each of them 113 tonnes in weight and 36 metres long. The crossing was also produced and delivered by voestalpine Railpro in collaboration with Dutch concrete company Spanbeton. This type of crossings can be delivered with a prefabricated arch and placed in cant. It is worth to note that contractors usually install concrete crossing of six to nine metre length.