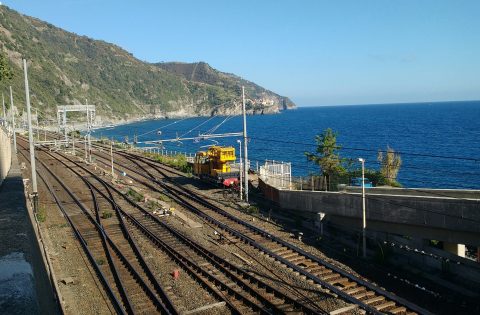 Two railway lines that were affected by the collapse of the Morandi Bridge in Genua have been reopened Thursday 4 October. They were closed for more than seven weeks, leading to a significant decline of rail freight volumes handled by the north Italian port.

According to the Rhine-Alpine Corridor management, the reopening concerns the Bastioni and Submarine (Sommergibile) lines. These run parallel to each other under the collapsed Morandi Bridge. The restoration involves four tracks for the northbound movement of goods and passengers from the port of Genoa. The Submarine line is the most important line for the movement by freight.

The tracks of the Succursale line are still blocked by debris. These two lines will remain closed until the remainder of the bridge has been demolished. As a result, the timetable for rail connections to and from the junction of Genoa will be modified, with changes in travel time and stops at some stations. Freight operations to and from the port of Genoa will be planned and modulated according to the commercial needs and availability of the lines, said Italian railway company Ferrovie dello Stato (FS).

In the first six days after the reactivation, until 9 October, trains will travel the stretch affected by the work at a speed reduced to 30 kilometres per hour, which will result in a slight lengthening of travel times not foreseen in the published timetables, FS added.

Work to reopen the northbound freight lines from the port has been carried out by a team of sixty people working in shifts, for 24 hours a day for 19 consecutive days. The works only started a couple of weeks after the collapse, as a permit was required. A part of the bridge did not collapse, jeopardising the safety of staff working in the affected area. The risk area is currently defined as the red zone.

To ensure safe passage of trains on the activated lines, infrastructure manager Rete Ferroviaria Italiana (RFI) followed the request of the expert committee and installed a 70-metre long and 8-metre high barrier. Furthermore, safety-monitoring sensors placed on the stumps of the bridge are connected to the RFI operations centre; they allow RFI to stop the railway traffic at once in the event of a warning signal. Finally, a video surveillance system will be installed, with ten high-definition video cameras for the supervision of the areas. These will remain in place until the red zone is considered safe, explained Ferrovie dello Stato (FS), the Italian railway company.

Since the collapse of the bridge, freight transport at the port of Genoa has decreased by 35 per cent compared to the 2017 level. The affected railway lines were closed for traffic for a period of 51 days. According to the Ports of Genua, the impact on railway traffic was due to the collapse of the bridge on the Polcevera Yard. “The rail tracks of the Polcevera Yard were directly involved by the collapse of the Morandi Bridge and are currently blocked by ruins which have to be removed in order to repair damaged infrastructures and reactivate train circulation”, the authority explained in the days after the bridge collapse. The Bastioni and Submarine lines both run through the Polcevara Yard.

The Submarine Line is used for freight traffic between the Marittima and Sampierdarena station. The Bastioni line carries freight from Sampierdarena station to Ovada, Milan and Turin. During the closure, some alternative routes were available. Moreover, long-haul rail freight traffic is only managed by the Voltri Mare station, which operated as usual, the RFI said at the time of the accident.

On 14 August the Morandi Bridge in Genoa collapsed. The bridge used to run across the Polcevera stream and was part of the A10 toll motorway, connecting the districts of Sampierdarena and Cornigliano. Due to the collapse, at least 43 people died.