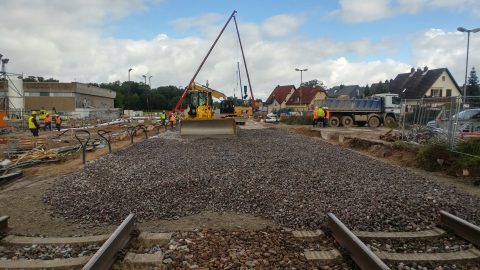 Rastatt one-year anniversary: where are we now?

It is exactly one year ago that the disrupted railway line at Rastatt was reopened for train traffic. The three lobby organisations ERFA, NEE and UIRR take the opportunity to highlight the lessons learnt so far, and the steps yet to be taken.

On the 12th of August 2017, water and soil penetrated part of the new Rastatt tunnel in Germany. As a result, the ground subsided and the railway tracks above the tunnel warped. The line between Karsruhe and Basel was closed for all traffic until 2 October 2017 – one-and-a-half month later- causing significant damage to the industry. “Never again must the closure of a small stretch of railway line lead to such chaos and wide-reaching economic damage”, said the lobby organisations in a joint statement.

Where are we now?

Since the Rastatt incident, all sides of the rail sector have committed to tackling the main challenges facing rail freight. A major milestone was the adoption of English as the main language of communication between infrastructure managers and railway undertakings during international disruptions. At least one English speaking dispatcher in national traffic control centres will be guaranteed in every shift from 2020.

“Off the shelf” rerouting options and traffic management scenarios that minimise disruptions are being prepared, including information on technical parameters and other operational requirements. “This will help to keep trains running in the event of disruptions.”

From now on, one infrastructure manager takes the lead in case of a disruption. This party must coordinate the international cooperation and manage the available international re-routing capacity. Relevant re-routings and mitigation decisions should be taken within the first 24 hours. Within 36 hours of an incident taking place, a rough indicative timetable should be provided.

Moreover, new rules regarding the allocation of capacity on disrupted lines have been formed. These rules guarantee a share of capacity between annual timetable traffic and ad-hoc traffic. All these improvements are meant to be adopted by infrastructure managers from the start of the 2019 Timetable. This was concluded in the European Handbook for International Contingency Management (ICM), published on 23 May 2018.

Steps to be taken

ERFA, NEE and UIRR believe these changes are a good step in the right direction. However, further actions are needed, they state. Contingency management procedures for incidents that last less than three days should be developed. Disruptions of a short duration can also have a negative impact on the quality of rail services offered, the parties believe.

“Off the shelf rerouting options should include an estimation of the capacity of trains that can be absorbed. Where the re-routing options provide insufficient capacity and are technically and/or operationally incompatible, investment in the infrastructure and in the single European rail network should be identified as a priority.”

The parties also plead for lowering the current B1 level language requirement for train drivers and moving towards English as the main operational language for rail at a much faster pace. They suggest considering screen-based technical solutions to effectively address the problem of communication between traffic controllers and train drivers, and the replacement of telephone conferences and complicated communication chains through digital communication.

The parties point out that apart from the plans outlined in the ICM, railway undertakings should also identify and put in place their own contingency management plans to ensure backup options in the event of disruptions. “The new rules should be used as an opportunity to improve coordination and management of traffic disturbances.”