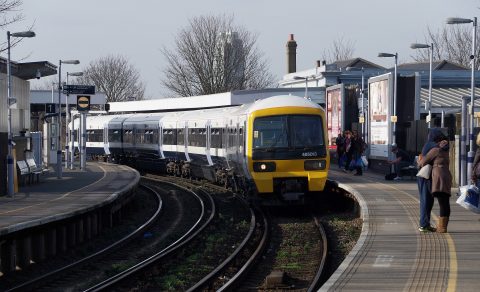 Infrastructure manager Network Rail and train operating company Southeastern have agreed to make changes both to the railway infrastructure and processes to prevent another incident like the one on March 2 in Lewisham in southeast Londen when nine trains got stuck on the tracks around Lewisham due to snow and ice. Passengers were stuck for hours and ended up evacuating themselves onto the third-rail electrified track, risking electrocution.

Network Rail is investigating adding conductor rail heating at key locations which, although not prone to freezing, could potentially benefit. A trial of a more effective anti-icer on snow and ice treatment trains will also be carried out, and Southeastern is exploring the use of ice-breaker shoes on some passenger trains.

The train operating company is also examining engineering changes to extend train battery life so that communications systems and lighting could stay functioning for longer when third rail power is unavailable, as was recommended by the independent report.

When it comes to changes in incident management, Network Rail and Southeastern are working with specialist consultants on planning and preparation for severe weather, including examining the criteria needed to decide if trains should run.

Network Rail and Southeastern announced their action plan following the release of an independent investigation into the incident of 2 March. The Southwood Rail Consulting and Arthur D Little investigation is separate to the investigations which are being undertaken by the Railway Accident Investigation Brand and Office of the Rail & Road.

The Southwood Rail Consulting and Arthur D Little report makes several recommendations. To prevent passenger self-evacuation, the NR and Southeastern must improve how railway staff communicate with passengers to advise them on the likely delay and the need to remain on the train. In Control, a timer displaying the time that each train has been stranded could support effective decision-making.

When it comes to prevention and management of stranding incidents, railway staff in Control and Signalling functions can use existing control and signalling systems and work with train drivers to quickly identify trains that are moving unusually slowly or have stopped. On top of that, train drivers can work with railway staff in Control and Signalling functions to get additional resources, such as Mobile Operations Managers, mobilised rapidly to the incident location.

On 2 March, nine trains were stranded near Lewisham in southeast Londen due to bad weather conditions. They were stranded around 18.20, some trains were stuck for more than four hours and didn’t arrive until after midnight. Passengers self-evacuated onto the third-rail electrified track, risking electrocution.

According to the report, multiple mistakes were made during the incident. The rail industry did not manage the incident in a way that put the needs of passengers first. The report calls the conditions ‘unacceptable’. Some passengers were stuck on trains with no toilet by design, or non-functioning toilets. The heating stopped working, but there were no blankets available on the train, leading to freezing conditions in the trains. There were reduced levels of lighting due to load shedding.

Discomfort was one of the reasons the passengers deciding to evacuate themselves, a decision that the report called ‘understandable’. Some trains were stranded only meters removed from the station. In one instance, it was only 50 meters away from the train station. Twitter messages from the rail industry organisations were often contradictory and confusing. Seeing people walking outside also increased the chances of other passengers following suit.