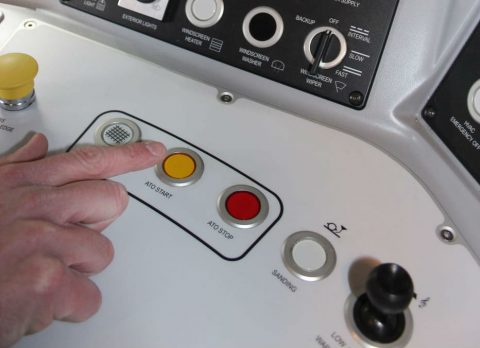 Govia Thameslink Railway has successfully operated its first train with passengers using Automatic Train Operation (ATO) in combination with ETCS Level 2 earlier this month. The Thameslink trains will in the future use the technology to run between London St Pancras and London Blackfriars at a rate of a train every 2-3 minutes. GTR is using GoA 2 (Grade of Automation), where the driver checks the platform, closes the door and initiates departure from each station.

Automation will make this ‘core’ north-south connection across the capital the new heart of the region’s railway network. It will serve 80 more stations than today on 12 separate routes, helping create capacity for up to 60,000 more people in each peak and speeding journeys for hundreds of thousands of passengers. The Automatic Train Operation (ATO) system is developed by Siemens and operating on Network Rail’s new digital signalling system.

Delivered by the Government-sponsored £7bn Thameslink Programme, which also includes Britain’s biggest new train fleet and the £1bn upgrade of London Bridge station, it is a key element in GTR’s RailPlan20/20 modernisation plans.

GTR Engineering Director Gerry McFadden said: “Govia Thameslink Railway is blazing a trail with self-drive trains which can run at higher frequency than manual operations. We are embracing digital technology to boost capacity through the heart of London, an historical bottleneck that has held back rail expansion across the south of the country.”

“Self-drive technology also has great potential for the rest of the country’s rail network, particularly on congested routes, and could in future reduce the need for costly infrastructure projects. We’ll always need a driver in the cab but this technology allows us to run more trains, more frequently than we could by driving the trains manually and for passengers, the trip will be as smooth as ever.

“Trains can run more frequently, which allows us to add 80 more stations to the Thameslink network across the south and east of England, speeding journeys for hundreds of thousands of passengers. Drivers and their union representatives have been fully consulted.”

The Siemens in-cab system uses optimum acceleration and braking on board the Class 700 Thameslink trains while maintaining a smooth ride for passengers. The driver remains in the cab to check the platforms at stations, close the doors, and manage the overall safe operation of the train.

Automatic train operation works with Network Rail’s new digital signalling system, which means trains can safely travel closer together through the central section of London with knock-on benefits for hundreds of thousands of passengers across the wider network.

The trip from Peterborough to Horsham was a demonstration of the technology that will be put into use in 2019 when the service gradually increases to 24 trains per hour in each direction – the equivalent of a train every 2 to 3 minutes.

Twelve different routes will pass through the central section from places as far afield as Peterborough and Cambridge, and Brighton and Maidstone, meaning passengers will be less likely to need to switch to the Tube.

This automatic train operation is one of a series of innovations to significantly boost capacity on the most heavily congested network in southern and eastern England, creating space for 40,000 more commuters into London each morning and evening peak this May, and 60,000 by December 2019.