Pavel Popov of Russian Railways gave an update on the testing and plans with Automatic Train Operation in Russia during RailTech Europe 2021. Already this year, the railway company plans to start using the first autonomous passenger trains (GoA3) in the regular timetable in September. A few thousand field tests have already been done, and the company is working on validating the system for operation.

In the Moscow region, state-owned company RZD is currently testing two different passenger trains, and a third for GoA4 is under design. The first two are suitable for the driverless Grade of Automation 3 (GoA3). This means the starting and stopping are completely automated, and a train attendant operates the doors and drives the train in case of emergencies. A few thousand field tests to test the obstacle detection have been carried out. “It is important to test these systems on the track but also with a simulator, so you can test every different situation that can occur”, says Pavel Popov, technical head of implementation of ATO at JSC NIIAS, a subsidiary of RZD. 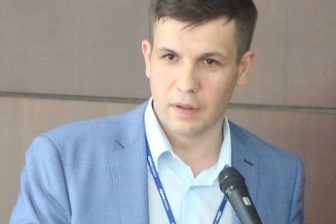 The first test train, Lastochka No 113, is equipped with an infrared camera, eight optical cameras, and Lidars. During winter tests in January, obstacle detection was tested, says Popov. “The system can detect obstacles at a distance of 500 meters, but also at a distance of 700 meters it can detect obstacles like pedestrians, in winter conditions.

Based on the first tests, Russian Railways developed the second train, the Lastochka No 136, with ‘GoA3+’. The train has an improved obstacle detection unit (ODU). It has an additional infrared camera, and this as well as the Lidars are equipped with a cleaning system. It’s also equipped with additional ultrasonic sensors for close distance, and a new set of cameras. On board, there are systems added such as the Catenary Control Unit (CUU) and the Embarkation and Disembarkation Control Unit (EDCU). 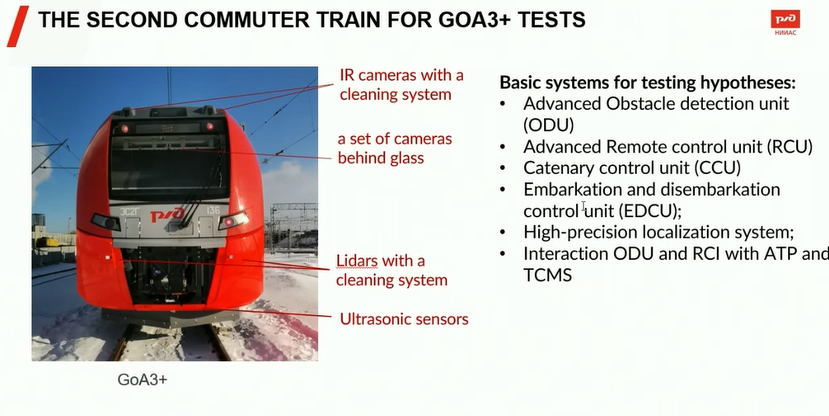 “It’s a very important step to control embarkation and disembarkation, we started developing this system a few months ago”, says Popov. The requirements of this detection are to detect dangerous situations such as people getting stuck between doors, fall between the train and the platform, if there are people or obstacles on the track and any deviant behaviour on the platform.

“I’m convinced that the obstacle detection system will work better than a human driver. Especially during night conditions, with infrared sensors”, says Popov. There is a remote control as a back-up system, where an operator can remotely control up to 10 train and if necessary drive one train in case of equipment failure. It can control all parameters of the Russian ATB system.

They developed an obstacle classification for railways. “There are many different scenarios, with different obstacles, weather conditions, lighting conditions infrastructure. The number of possible scenarios tends to infinity. The main questions for us is how to prove the system, and how many tests are necessary to fulfill.”

One on-field test takes up to 10 to 15 minutes on the test ring. Before the field tests, a simulator was used. Popov: “We have done a few thousand on-field tests, in many different situations. We are now developing critical scenarios to prove safety using an approach by validation and verification.”