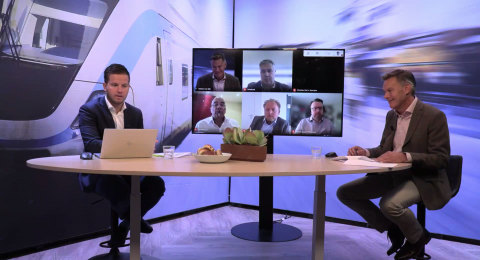 Last Friday, Royal HaskoningDHV organised the online webinar Building Information Modeling (BIM) for Rail together with SBB, ProRail and the Birmingham Centre for Railway Research and Education. Several speakers discussed different ways BIM can be of great value. “In rail we can learn a lot from other industries, but we need to make those things applicable in our own field”, says Daniël Gmelig Meyling, BIM Lead Transport and Planning at Royal HaskoningDHV.

The webinar, which was broadcasted from the ProMedia Group Studio in Rotterdam, is a follow-up to last year’s two-day session on Building Information Modeling in the Dutch city of Amersfoort. More than 70 people from 10 different countries attended the online seminar this friday. With BIM, all physical and functional characteristics of a building, component or infrastructure project are displayed in a digital model. Peter Boom, Director Rail Asset Management and Digitization at Royal HaskoningDHV (RHDHV): “The idea of ​​this bootcamp is to bring different (potential) users of BIM together and to let them learn from each other”.

Contrary to the previous edition, an extensive programme with workshops is not possible due to covid-19, but a lot of information is exchanged about how BIM can be of great added value for the rail sector. BIM Lead Transport and Planning at RHDHV Daniël Gmelig Meyling moderated the questions during the webinar. According to him, the added value of BIM for projects in the rail infrastructure has only been recognised for a few years. He also explains that BIM is more than just a model. “It is a way of working, how you organize all your data and information.”

The BIM for Rail webinar kicks off with a short introduction by Swiss Railways SBB. Adrian Wildenauer, Senior BIM project manager explains that SBB made a roadmap for BIM, which starts with the aim of realizing all major building construction projects with BIM by 2021. In 2025, this will also apply to all rail infrastructure, an ambitious goal. International standards for BIM are also important according to Wildenauer.

Winfried Stix, Chairman of the Building SMART Railway Room continues on this topic. He worked for more than 40 years at the Austrian ÖBB on data governance in the company and is now working on the standardization of BIM. “At the moment we are in the validation phase of the software,” says Stix. During the test phase, we collaborate with software suppliers. To organize it, use cases are defined, and associated ‘story lines’: realistic infrastructure projects. The software is tested on how these problems can be solved in a standardized way. This will provide real solutions, and not just pages long documents of standards.

Different parties are interested in different types of storylines. In China, for example, there is a lot of interest in high-speed lines, and Scandinavian countries have introduced storylines about level crossings. In the final situation, the software should, for example, be able to indicate what quantities of assets are needed for a project. “Eventually, someone from maintenance can see in Virtual Reality what kind of lamp is needed for a semaphore. It’s not just about making 3D pictures of the track, there are really a lot of possibilities with this technology. ”

It is important to exchange data and information with construction companies and engineering firms, emphasizes Thymo van den Brug, Manager Development Asset Management Information at Dutch railway infrastructure manager ProRail. As an example he mentions the Delft Campus station, where a 3D BIM model is used. “We have not yet started the major implementation of BIM, but we are experimenting with it. Just a good looking model, also called “boardroom BIM”, is not what we are aiming for. It’s about the data in the model.”

ProRail also wants to work on ‘predictive maintenance’, says van den Brug. “If you know how to use data properly, you can better predict what will happen to the assets. One of our goals is to prevent a failure in the system before it happens.” Using an interactive visualisation, van den Brug shows how data plays an important role in the entire rail system.

In between talks there is also room for interaction between the participants of the webinar. The question of which BIM-related projects participants worked on in the past year received a lot of responses. These projects can largely be placed in the design phase, but also in the following phases of the lifecycle: build, maintain and operate. Below you can see some of the projects which were mentioned.

The last speaker is Professor Clive Roberts, Head of the School of Engineering at the University of Birmingham. He talks about digital twins, which are the ultimate use of a BIM model. A digital twin of a regional railway is quite different from that of an aircraft engine, for example, he explains. They are both complex systems, but a single engine is not geographically bound. This does apply to fixed infrastructure. He also says that he sees how often the same data is collected several times. Also, different stakeholders have different views on the system. There is a significant loss in many projects, because there are not the right tools and digital twins to help the process.

“If you don’t keep the BIM model up-to-date, it will be of little use. The railways are not static, things are constantly changing. You have to update the BIM model live with the current status of assets, only then it is truly useful”. Roberts shows, among other things, a model of the flow of passengers in a station, and how the passenger flow goes when getting on and off a train. On the West Coast Mainline route in the United Kingdom, a digital twin is being developed that integrates various simulations, including timetable assessment, real-time data and passenger simulations.

Peter Boom concludes that digital rail twins are being developed in both the United Kingdom and the Netherlands. “Royal HaskoningDHV is working hard on this in the Netherlands and would like to work with Clive Roberts’ Birmingham Center for Rail Research and Education to look at next steps and possible synergies. We will certainly hear more about this at a next boot camp!”

The next edition of BIMforRail will be hosted at the University of Birmingham in 2021. 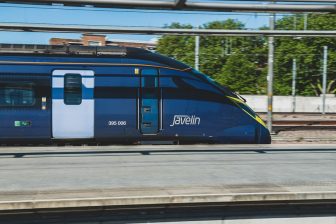