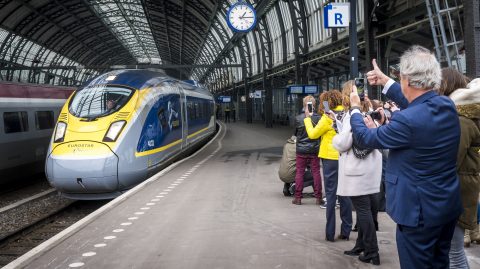 Work has begun on the instalment of a facial biometric corridor along Eurostar’s high-speed rail routes from London through Europe. This cutting-edge facial recognition system, funded by the UK Department of Transport, will protect railways against identity crime using deepfakes or morphs and give passengers faster pre-boarding options.

The biometric corridor, which has been called the “future of rail travel” is scheduled to be in live operation by March 31, 2021, on Eurostar railway networks with St Pancras International as its heart centre. The software which facilitates the facial biometric check has been developed by iProov, a company founded in 2011 with a track record of assisting banks, including the ING in the Netherlands, and governments to meet their Know Your Customer (KYC) regulations. They became the first British company and first non-US company to be awarded a contract by the US Department of Homeland Security (DHS). Andrew Bud, the founder and chief executive officer of iProov ensures that the facial biometric corridor is a fast project with live user testing to be completed in nine months. “People will be walking through the biometric corridor by March 31.”

The much anticipated biometric authentication process will protect the rail services against large-scale criminal attacks using deepfakes, an increasing threat. It also protects against spoof attacks from photos, videos, masks and replay attacks.

The biometric check uses patented controlled illumination to authenticate the identity of the passenger against their identity document. The Eurostar app will be used beforehand to scan identity documents followed by the iProov scan.

The technology assures the genuine presence of the passenger by checking that the traveller is the same person as presented in the passport. The illumination process checks that the user is a real person; rather than a photo, video, or mask; and that they are authenticating in real time.

Eurostar released a statement saying: “This project, which uses iProov technology to verify identities of travellers, provides an exciting opportunity for us to explore how we might offer an even more seamless and smooth experience through our stations for our regular passengers. We are grateful for the support of the FOAK2020 programme, funded by the Department for Transport and delivered by InnovateUK.”

Following authentication, the passenger receives a message confirming that their identity document has been secured and a ticket or passport does not need to be shown again until they reach their destination. On arrival at St Pancras International, the passenger enters the contactless travel corridor to board the train. Social distancing measures will also be incorporated, a customary practice on travel platforms worldwide, since the covid-19 outbreak earlier this year.

Several airports are already using these identification systems. In the United States of America there are more than 60 airports using biometric checks. Big airports in Europe also make use of the technology including Istanbul and Rome. There are also several airports in Asia using biometric checks. The facial biometric corridor at St Pancras is, however, the first of its kind for rail networks in the world. This facial recognition technology has been used in the ID Document check app created by the UK Home Office for smartphones.

Deepfakes is an umbrella term for synthetic media that takes an existing person’s image and replaces it with someone else’s likeness. It pertains to manipulated videos, and other digital representations produced by sophisticated artificial intelligence (AI). Plausible fabricated images and sounds also fall into the domain of deepfakes.

Mr. Bud describes a deepfake as a piece of video that appears to depict a person doing something and is completely forged using deep convolutional neural network for machine learning. “That’s why deepfakes uses a general, very real network, very cheaply. One of the things that iProov does is, we protect against deepfakes. A person can’t enrol using a deepfake. This is to defend against ‘morphing’. A morph is an image that looks like two images. It can be a mixture of a terrorist’s face and your face. It looks like you and part of the terrorist’s face. But it’s not enough for them to walk down the corridor. The photo cannot be used to enrol.”

The biometric check will be a two-stage process. A passenger enrols and that enrolment associates them with the ticket. “Essentially the passenger takes a highly secure selfie. We authenticate real people’s faces, manifest for that train. It serves as a ticket check and a UK border check.” According to Bud, a directorate of the French National police known as Police aux Frontières, are not yet on board with the process. “This is something they will have to decide.” “This is the largest scale, secure biometric corridor in the world, or at least in the West, and the most successful.”

The facial biometric corridor will be used on high-speed railway lines with the aim of creating a better passenger experience and a higher throughput. “What started off as a project to reduce travel congestion and keep passengers moving is now going to help keep people safe in a pandemic world through social distancing and contactless interaction,” says Bud.

If you collect people’s faces at home, you can’t trust them if it’s not iProoved. If they want to use it as identification they have to make sure it’s a real face, not a morph. Imagine if someone were to steal your passport and they are able to walk onto the train. We stop that from happening. iProov stops people using deepfakes. You have to be a real person, right now. That is the future of rail travel. Trains are where people have tried terrorist attacks. This prevents that. It’s a border exit control while making it more simple. We are integrating a set of proven technologies in a new way.” The attack on the Thalys train, Oignier, France in 2015, is one such incident where a man opened fire on the train enroute from Amsterdam to Paris. Three passengers and the assailant were injured.

Eurostar and the roll-out of the facial biometric corridor is supported by the First of a Kind 2020 (FOAK2020) programme, an initiative by the Department for Transport in the United Kingdom (UK) and Innovate UK to stimulate railway network innovation, research and development. The concept has already been trialled in airports to increase speed and safety as well as manage immigration.

Chris Heaton-Harris, the Rail Minister of the UK said, “The innovative use of technology will play a major role in modernising customer experience on our railways. The First of a Kind competition has produced truly innovative projects and we look forward to seeing the benefits in passenger efficiency and safety that iProov technology will bring.”