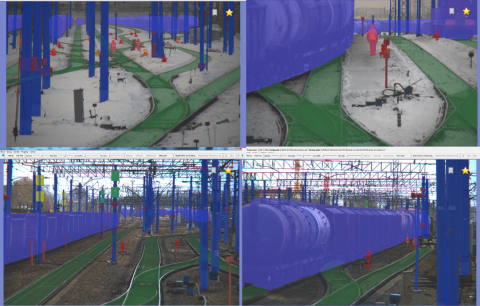 Extreme weather not an obstacle for self-driving locomotives

There are many obstacles for railway undertakings in implementing the Automatic Train Operation (ATO). One of them is extreme weather that complicates the operations of the locomotives and trains, even those with drivers. To tackle this issue, Russian technology company Cognitive Pilot has developed a specialised type of sensors. It allows self-driving shunting locomotives to efficiently and steadily run during snow or rain.

In 2019 Cognitive Pilot, a joint venture of Russia’s Sberbank and Cognitive Technologies Group, started a remarkable project in a partnership with Russian Railways (RZD). It developed Cognitive Rail Pilot, a dedicated technology solution for autonomous driving of the shunting locomotives, and installed it on a ČME3 vehicle, which is widely used in Russia and other post-Soviet countries. The driverless locomotive was tested in various locations in the country including Vologda and Ufa.

“During the tests, we were examining how the system works in various conditions, depending on season and weather as well as whether the locomotive hauls the wagons with freight or runs without them. We’ve successfully checked all shunting operations such as stopping, smooth running, coupling with the train, working movement inside the station and others. In addition, we tested all the functionalities: preventing the Signal Passed at Danger (SPAD) incidents with a possibility of braking, running through turnouts, preventing collision with a pedestrian or an animal, preventing collision with another train. The results were excellent,” Olga Uskova, CEO of Cognitive Pilot, unveils some details of the experiment.

The Cognitive Rail Pilot consists of a wide range of technologies – from cameras to sensors and software. For instance, the solution has colour video cameras with short, medium and long-range vision, temperature and humidity control system of the unit with additional heating, three-axis active vibration isolation system, positioning radar, power protection and failure control system, integration unit with traction and braking systems, advanced AI-algorithms for data processing and others.

Moreover, the Cognitive Rail Pilot also includes some extraordinary components. Among them is the 4D Imaging Radar. “It is a sensor of a new generation that was developed by our company and was produced at our robotised plant in Tomsk. This sensor was developed for operations in extreme weather conditions – for example, in snow or rain. And the product itself uses the low-level data fusion method, which summarises and processes comprehensively all the data received from all sensors and systems at the lower level, which eliminates the need to accumulate local errors,” Olga Uskova explains. Owing to the 4D Imaging Radar, the solution is also able to recognise the ground-level traffic lights when they are covered with heavy snow.

As for detecting humans, Cognitive’s solution has no problems with this. It recognises people with an accuracy of 99.998 per cent and distinguishes a human being from an inanimate object. “The unpredictability of human behaviour does not affect the recognition of the object. In this regards, everything works with unique accuracy. If a man crosses the tracks, the system will detect him and will stop the locomotive. Of course, there are some limits because of locomotive’s weight and its long braking distance,” Olga Uskova says.

As of today, Cognitive Pilot has already equipped 10 shunting locomotives of RZD with its solution for autonomous driving. It has been recently certified for further deployment in much more locomotives. “This permission means a possibility to install our solution on around 10,000 locomotives,” the chairwoman of Cognitive Pilot adds.

Regarding the future plans, the Russian company is also working on the adoption of the solution for the mainlines and infrastructure monitoring. “To introduce the Cognitive Rail Pilot on the mainlines, we need to address a wide range of tasks: from the unmanned traffic to monitoring the condition of tracks and rail infrastructure. Shifting to automatic monitoring of rail infrastructure will save large amounts of money and a big number of lives. We are currently working on this together systems with one of the leading machine manufacturers,” Olga Uskova, CEO of Cognitive Pilot, sums up.