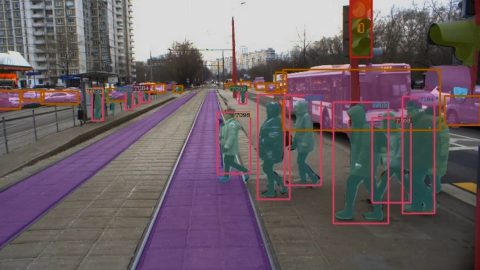 After successful tests of the autonomous tram in Moscow, Russian company Cognitive Technologies is planning to develop an AI-based computer vision system for the Chinese market. This needs for testing and launching the self-driving trams in Shanghai. The project will be implemented in 15 months.

In order to achieve the mentioned goal, Cognitive Pilot, a joint venture of Cognitive Technologies and Sberbank of Russia, has joined forces with Fuxin Intelligent Transportation Solutions Company (FITSCO), one of the largest suppliers of signalling and communication solutions in China. Both companies signed a cooperation agreement for the development of an AI-based computer vision system and the further introduction of the autonomous tram traffic on the streets of Shanghai. “The new technology will reduce the number of transport accidents in the city and will minimise their dependence on the human factor,” said Jack Wu, CEO of FITSCO.

Taking into account the experience of Cognitive Technologies in Russia, the new solution will be able to detect objects and obstacles when a tram runs, to stop it in case of an emergency, to break or accelerate a vehicle smoothly. Both partners, Cognitive Pilot and FITSCO, expect to develop the technology for the Chinese market within 15 months. “In the nearest future, we will demonstrate a fully autonomous prototype”, specified Jack Wu.

The entire project consists of three stages: research and development, testing of the system on tram routes in Shanghai, implementing the solution for other cities and provinces in China. “The result of the project’s first stages will be the development of AI-based Advanced Driver Assistance System (ADAS). In the absence of a proper reaction from the driver, the tram will automatically control its speed and will brake in front of the obstacles. During all the upcoming tests, the tram operator will still be in the cab, but he will act as a safety controller,” noted Olga Uskova, CEO of Cognitive Pilot.

Both partners do not report the exact location where the planned autonomous tram will be tested. It is worth to note that there are two separate tram networks in Shanghai. The first one is the Zhangjiang Tram that was opened in 2010. With the help of rubber-tyred light-rail vehicles, it connects the neighbourhoods in Zhangjiang Town to Zhangjiang Hi-Tech Park station of Shanghai Metro. The 10-kilometre network has only one line with 15 stops.

The second tram system in Shanghai runs in the Songjiang District of the city. It was launched at the end of 2018. Now, it includes two lines and is served by the conventional trams. The Songjiang network is operated by Shanghai Keolis, a joint venture of Shanghai Shentong Metro Group and Keolis.