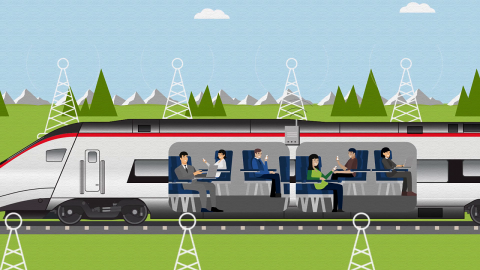 To improve the Wi-Fi connection in the British trains, the research team of Scotland’s Heriot-Watt University has developed a new antenna. It will address the issue of notspots during train journeys with the help of satellite communication. The antenna’s prototype will be tested on a train of a UK’s major railway operator by the year’s end.

The British passengers make 1.8 billion train journeys annually. According to the uSwitch survey, two thirds of passengers have no opportunity to connect to onboard Wi-Fi while the remaining third have some problems and disruptions even when using the messengers such as WhatsApp. The reason for such poor connectivity is the usage of fibre-optic superfast broadband technology that is not available in rural areas.

“Cities provide continuous connectivity using a large network of antennas. However, there are fewer placed in rural areas, especially along railway tracks, which results in the signal being lost. However, extending the ground network to improve access in the rural areas is expensive and unreliable for transportation,” Samuel Rotenberg, a research engineer from Heriot-Watt University, said.

In order to solve this problem, the research team of Heriot-Watt University has developed a flat panel antenna that will use another technology. The innovation will provide a wireless internet connection in trains via satellite communication. “The benefit of using satellites, whether Geostationary (GEO) or Low Earth Orbit (LEO), means connectivity is seamless for all passengers regardless of the number of people trying to connect onboard,” Rotenberg added. According to him, the new antennas will be “large, heavy, bulky and dish-shaped so aren’t aerodynamic and are impractical for high-speed trains to carry.”

At the same time, Professor George Goussetis, principal investigator on the project, emphasized that the benefits of the new technology could have benefits not only for passengers but for the railway operators too. “Our technology also has the dual benefit of improving the security of transport vehicles, providing a continuous real-time stream of data so, in the event of any unforeseen problems, the connectivity will help support the onboard team,” he said.

For the further development of the solution and its funding, the research team had incorporated a spin-out company named Infinect. It has already attracted some grants from the European Space Agency, the Department for Transport (T-TRIG award) and via the High Growth Spin-Out Programme run by Scottish Enterprise.

Samuel Rotenberg, co-founder and lead engineer of Infinect, has also been awarded a place on the prestigious ICURe Innovation to Commercialisation Programme, funded by Innovate UK. “This game-changing technology is the first Heriot-Watt project to be part of the ICURe programme which aims to support academic researchers on their commercialisation journey,” Paul Devlin, Head of Commercialisation at Heriot-Watt University, noted.