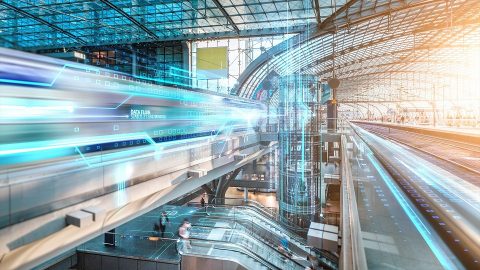 Internet of Things for safer railways

Dutch technology company Dual Inventive will get an Internet of Things (IoT) network. It will be provided by Vodafone Business in the next five years. Dual Inventive, in its turn, will use the IoT network to make railways in the Netherlands, other European countries, USA, Australia safer and more efficient.

Dual Inventive is focused on the development of technological systems for optimal and safe usage of the railway system. With the IoT network, it will be able to better monitor the rail infrastructure including the temperature of the tracks and other parameters as well as to provide preventive maintenance in a more efficient way. This will allow monitoring workplace safety during work and tracking trains and wagons. For these purposes, Dual Inventive will use two special IoT networks supplied by Vodafone Business: Narrowband-IoT (NB-IoT) and Long Term Evolution for Machines (LTE-M). As the Dutch company works on an international scale (besides the Netherlands, it operates in Belgium, France, Germany, Great Britain, USA and Australia), Vodafone Business will provide its technology to Dual Inventive together with its partners in the mentioned countries.

LTE-M and NB-IoT are so-called low power wide area technologies. These networks boast supreme coverage and can connect IoT sensors without using much energy. In case the IoT network is not powerful enough at a certain spot along the railway track, it will, without any intervention, switch to other available networks like 2G and 4G, thanks to a special multi-bearer SIM.

“Dual Inventive has found a partner in Vodafone Business with whom we can realise our future ambitions. We believe that the railway system is the transportation mode of the future and are convinced that it can be used more efficiently and effectively by using wireless technology. Since 2008 we have been providing IoT technology that makes working on the railway infrastructure up to 40 per cent more efficient, resulting in valuable railway capacity for the Netherlands and abroad. Due to this cooperation we can continue and enhance the increase in railway efficiency”, said Lex van der Poel, CEO of Dual Inventive.

“IoT is more than devices talking to each other and exchanging data. IoT offers smart solutions that make our daily life easier, safer and more valuable. And this is exactly what we will be doing with Dual Inventive. Worldwide we have realised 99 million IoT connections and in the Netherlands, we offer nationwide coverage with our IoT network. This makes us the right partner for realising the ambitions of Dual Inventive”, added Joost Wijermars, director B2B products at VodafoneZiggo.