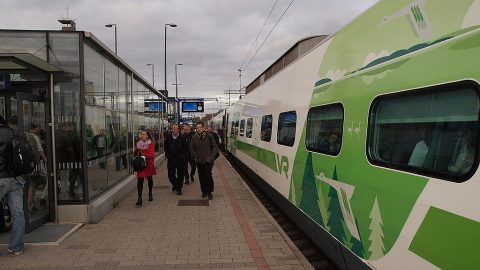 Onboard internet in Finnish trains will be faster

Finnish railway company VR Group is negotiating with mobile operators the launch of better internet connection in trains. The improved service is expected to be offered from February 2020. It will use a 4G signal along all routes of VR Group.

Last year the Finnish government has scheduled the construction of 4G networks in the country and coverage with full signal all railway lines. It should be done no later than February 2020. However, the mobile operators DNA, Elisa and Telia note that this move requires significant investments in infrastructure. “Upgrading all this infrastructure to get the same kind of data services as are available in urban areas nowadays is in practice an unreasonably big endeavour,” the Finnish title ‘Yle’ quotes the words of Jarkko Laari, DNA’s Radio Network Director.

Currently, many VR passengers are unsatisfied with onboard internet connection in trains. Due to the limited signal, the service often breaks up when a train runs via the countryside or remote areas. Also, VR limits the bandwidth available to individual users on its trains. As a result, passengers can’t download movies. According to the company’s survey, 27 per cent of users consider onboard internet connection as poor or fairly poor. At the same time, 31 per cent regard it as good or very good.

VR Group also intends to improve its rolling stock. To this end, the company plans to invest 250 million euros in purchasing the new trains. By 2026, the new vehicles will replace 34 units of Sm2 type produced in the 1970s. They will be able to speed up to 200 kilometres per hour (instead of 120 kilometres per hour by the outdated rolling stock). VR Group will launch the procurement proceeding this year. The new trains will run on the intercity routes in Southern Finland: from Helsinki to Kouvola, Tampere, Riihimäki, from Lahti to Riihimäki, Kouvola and from Kouvola to Kotka.