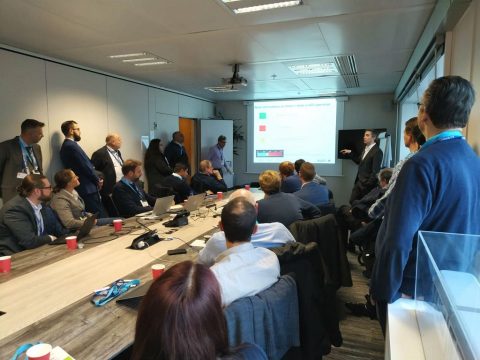 To truly give Automatic Train Operation (ATO) a kick-start, industry, public authorities, trade unions, train drivers, rail operators and asset managers must all support it and actively participate in making it a reality, argues manufacturer Alstom. “The aim is not to replace the train drivers, but to support them in their work”, says Stéphane Feray-Beaumont, Head of Innovation and Smart Mobility at Alstom.

On Tuesday, 19 November, Feray-Beaumont gave a presentation to the attendees of the Intelligent Rail Summit at Alstom’s head office in Paris. He explained their recent change of direction from a supplier exclusively focused on rail to a provider of sustainable, smart mobility solutions. This has involved developing systems for a seamless digital connection between the different mobility solutions, as well as producing electric buses.

Currently, 43 per cent of Alstom’s revenue is from the production of rolling stock (3.4 billion euros), 16 per cent from signalling (1.3 billion euros) and 18 per cent from the sale of digital services (1.6 billion euros). Although Alstom has entered into the road transport market with the electric Aptis bus, Feray-Beaumont does not expect the company to ever produce a private car.

The attendees at Alstom, who numbered just under 40, were also told about two of the company’s ATO projects: the automation of the regional RER A line in Paris, and the ATO test on the Betuweroute in the Netherlands. Contractors RATP and SNCF were given three years for the conversion of the RER A line, the busiest route in Europe, following a damning report from France’s supervisory body about the structural underperformance of the RER trains. For years, the punctuality was between 69.8 and 82.2 per cent, while the minimum level should be 94 per cent.

A number of reasons were discovered for delays on the line – it is 30 years old and is equipped with systems almost as old as itself. Of these, the ones that stood out the most were drivers not sticking to the speed limits and failing to respect stopping times at stations. In Alstom’s view, the way to tackle this was extensive automation. Since the solution developed by the company has been introduced, the train drivers operate the doors according to automatically determined times, and when they shut the doors the train immediately switches on. The train then drives automatically, ensuring that the designated speeds are reached and maintained. Coloured lamps show the driver when it is time to depart.

What is striking is that the rail operators SNCF and RATP do not make the use of the ATO system compulsory, though they do strongly advise it, especially at peak times. Every driver is obliged to make at least one fully manual journey per day in order to build up experience. In practice, 10,000 journeys are made with ATO each week. In the morning and evening rush hours, 95 per cent of journeys are automatic, and at other times the proportion is 84 per cent. The new approach means an average of 2 minutes saved per journey, so one extra train per hour can be operated. This has not allowed the desired number of trains – 30 per day – to be achieved, but according to Alstom this is because the trains still regularly stop too long at one of the 46 stations, to allow all 1.3 million passengers who use the service on a daily basis to get on and off the train.

The biggest challenge for Alstom was to make the infrastructure that dated from 1989, and rolling stock that was sometimes just as old, suitable for ATO without replacing anything. “As much as possible, we directed the process to switch to one sort of train instead of two, and that was the double-decker version. One of the reasons for the delays was that the different types of hardware did not combine well with each other and reacted differently with the infrastructure”, explains Francois Soares from Alstom. “We placed our own beacons between the existing beacons on the track to determine the position of the trains. Furthermore, we installed new hardware on the trains to make them ready for ATO: a special motherboard, three coloured lamps and a display. Testing was carried out between the existing passenger trains. We were able to finish the project in December 2018, as by then all 163 trains and the whole route had been kitted out with the new technology.”

While the RER A line uses an advanced assistance system, the test on the Betuweroute freight line went a step further. Last December, Rotterdam Rail Feeding, ProRail and Alstom carried out tests with a self-driving BR 203 diesel-hydraulic locomotive. During the tests, the locomotive ran between the existing train traffic on the Betuweroute.

An Automatic Train Operation system was installed in the locomotive, and the tests were made with Grade of Automation level 2 (GoA2). The locomotive travelled 100 kilometres in both directions, which allowed different system functionalities to be tested. According to ATO expert Sebastiaan van der Zee, the main reason this locomotive was chosen was the ETCS onboard, though generally speaking the somewhat older diesel-hydraulic freight train is not the most obvious candidate for an ATO test. “Compared to an electric locomotive, it reacts pretty slowly to traction commands.”

The test was conducted with a server on the track and a PC-based ATO system coupled to the ETCS. The emergency brake was not operated via ATO so it was always possible to intervene. Furthermore, for this objective it was not possible to communicate with ProRail’s train traffic controllers. “That’s why we built a replacement system. Apart from this, no safety-related systems were used. We tested ERTMS levels 1 and 2; the difference being that with latter you have continuous positioning.” In total there was a week of tests according to various scenarios, rounded off with a journey with the Minister of Infrastructure and Water Management and the Director of ProRail on board. “This was an incredibly tense occasion. It could have been a great success or a total disaster. Happily, it proved to be the former, which was a nice reward for the long, stressful days we had worked on it in the build-up.”

The project took 11.5 months, from the signing of the contract to the definitive test run. The work was done by a team of Alstom staff from five locations across three countries. In the preparatory phase, the locomotive was studied, and a prototype was built of the system as well as a digital twin of the locomotive and the Betuweroute. Then the equipment was installed in the locomotives and tests were carried out to see how this reacted to the technology. The last phase involved fine-tuning the relevant legislation and finally testing on the line itself.

One of the lessons that Alstom took from the testing is that it is very important to see how a train driver drives a train, so the ATO system is taught the right algorithms for traction and braking. “As the week went on, the system functioned better and better, so it was possible to make more exact stops in the places we had determined along the route, and to pass the measuring points at the scheduled times, as well as to run with fixed and variable speeds.” Three days for function tests and a week for tests in the field turned out to be quite short. “Nevertheless, we got all the tests done that we wanted to.”

One of the aims of the Betuweroute test was to show rail operators that ATO is possible in the Netherlands. All parties involved agreed that the test was successful. The next stage would be an electric locomotive, and possibly electric coaches too. However, there are currently no concrete plans in this regard, according to Alstom.