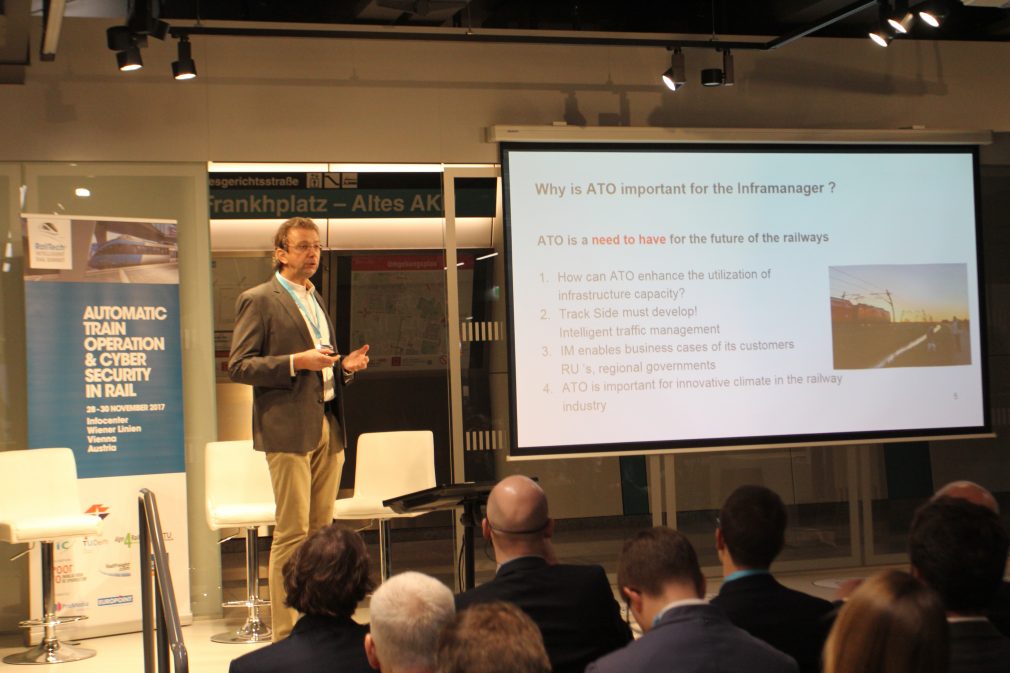 In 2018, ProRail is going to test self-driving trains on the regional network in Groningen and the Betuweroute. The track operator will carry out these tests together with a number of railway operators and the Province of Groningen. This was announced last week by Alfons Schaafsma, Innovation and Development Advisor at ProRail, during the Intelligent Rail Summit 2017 in Vienna. The tests with Automatic Train Operation (ATO), the technology that allows trains to drive themselves, will happen with a driver on board. A number of the driver’s tasks will be automated.

Schaafsma explained that ProRail, together with the Province of Groningen, will investigate whether Automatic Train Operation can ensure that one extra train per hour can be added to the timetable. Train operator Arriva has run the northern train services in Groningen and Friesland since 2005. “We believe that Automatic Train Operation will be part of the railway of the future, because otherwise the growth of mobility and the scarcity of rail personal will be problematic.”

Professor Rob Goverde of TU Delft, moderator of the conference, explained during the opening speech that Automatic Train Operation has four levels of automation. For the first level, also known as Grade of Automation 1 (GOA 1), the driver performs the vast majority of operation in the train. The train is protected by Automatic Train Protection (ATP), so for example it will brake automatically if it approaches a red light.

At GOA 2 level, the train is equipped with ATP and ATO. That means that the train possesses self-driving technology, but there is still a driver on board. The driver plays a supervisory role, takes action if the system fails or if there is an accident, and opens and closes the train doors. For GOA 3 and GOA 4, there is no driver on board the train.

ProRail is going to investigate four different business cases, all at the GOA 2 level. This will involve looking at whether advantages can be gained in terms of capacity and safety. One business case will be implemented with the Province of Groningen and the operator of the northern railways. There will be a study of whether an extra train per hour can be added to the timetable to generate more income from passengers.

A second business case will be implemented in conjunction with goods train operators on the Betuweroute. “Goods trains that come from the Betuweroute have to join the Dutch network alongside the high-frequency passenger trains. This means that goods trains must follow a precise path. GOA 2 calculate the optimum speed profile and makes precise adjustments to the speed of the train accordingly.”

Additionally, Schaafsma said that ProRail are researching whether the maximum capacity of the train tunnel at Schiphol Airport can be exploited with GOA 2. This includes looking at the experiences that are currently being gained on the Thameslink rail connection, where the trains take over drivers’ tasks on a certain part of the track. From 2018, trains are going to drive partly automatically across central London, which will make it possible for 24 trains an hour to run on the track. ATO systems calculate precisely how many trains can ride behind each other, so the capacity is optimized.

According to Schaafsma, ATO can benefit the busiest stretch of the rail network in the Netherlands. “If you have a bottleneck, it is important that you get to the ‘entrance’ of the bottleneck on time. It involves very narrow time windows. Perhaps in the future we must talk about an advanced form of train path management, as happens with planes. If a flight is not taken in a certain slot, this slot is no longer available.”

A fourth business case that will be investigated is whether the shunting of trains can be automated. At the moment, shunting goods trains in the port of Rotterdam consumes a lot of time and manpower. Moving empty passenger trains around to their correct places at the end of the day is also a very time-consuming task, which means that a lot of money could be saved through automation. ProRail will look at the experiences of the Swiss railway operator SBB, which has already done this.