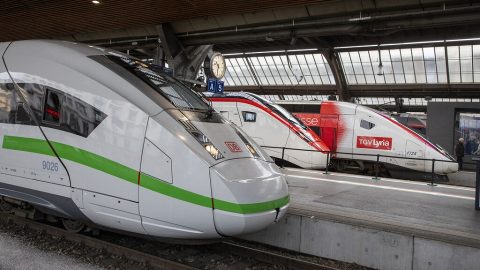 The corona crisis will continue to have a lasting effect on public transport long after the final restrictions have been lifted. Jampacked subways and railcars, a quintessential element of the global rush hour, become a thing of the past as international rail transport will advance and become the new focus of the transport sector. The way we look at transportation is changing, according to André van Es, Rail Transport Lecturer at Twente University and University of Applied Sciences Utrecht, and Bonita van Es, 5th-year master student Medical Psychology.

Currently the lockdown, due to the Covid-19 pandemic, has already brought to light some interesting effects. Directly after the implementation of the social distancing rules and restrictions, the use of public rail transport decreased with 90 per cent while productivity in the service sector remained largely unchanged. Apart from the hospitality industry, the work of the service sector turned out to depend on technology rather than location.

Due to the corona crisis, the percentage of Dutch people working from home increased to 44 per cent. Emailing, administration and sitting through board meetings, all could continue without being seated in an open-plan office space. Working from home has been welcomed by many service sector workers and has been reported as ‘a thing to get used to’. Seeing the current development of the pandemic it might very well be possible that (social distancing) restrictions will stay in place for a long time and that we as a society will need to learn how to live with things like working from home. The longer the pandemic lasts, the more time we have to adapt to these changes in our lives and break free from old habits.

The way that we view work and give meaning to it will be fundamentally altered. The human aspect of the job, meeting with co-workers and business partners alike will remain an important aspect that neither technology nor distance could replace. However, sitting in the train at 8 a.m. sharp and travelling in an uncomfortably packed cart to spent 8 hours behind a computer screen only to have to go back in an even more uncomfortably packed cart at 5 p.m. will likely not be on anyone’s top priority list once the restrictions are lifted. As early as April a quarter of the workers who were working from home and a third of the workers who held meetings through videoconferences expressed their wish to continue their work-from-home lifestyle after the corona crisis is resolved. As such, office buildings will start to serve as a place to commune rather than as a place to fulfil every aspect of one’s job.

Moreover, for the workers who can’t work from home, flex offices provide a solution. Companies rent out office space, even by the hour, for those among us with young children or limited space at home. Since one is no longer bound to a particular building, office space much closer to home can suffice.

The rush-hour crash has never been associated with cleanliness and hygiene. Specifically not during the cold season when fellow travellers start to cough and sneeze in your vicinity. By making the public transport the sole place in The Netherlands in which face masks are mandatory, the negative association between ‘the risk of getting infected’ and the use of public transport is strengthened. Neighbouring countries such as Germany have issued a widespread use of face masks (e.g. in shops and restaurants), incorporating the image and its connotations better in society.

While public transport is unconsciously being presented negatively, the alternatives for it have been highlighted throughout the crisis. Due to the crisis transport, in general, has decreased, leaving highways free of traffic, making use of car attractive again. Whereas in the recent past taking the car would have been an option to be frowned upon, the introduction of (relatively) affordable electric cars brings new opportunities. Moreover, on distances up to 20 or even 30 kilometres, people discovered the e-bike and speed-pedelec. Not only do these alternatives provide control and a small risk of contamination, but they are also a ‘green’ choice as well. As a result, public transport is now being challenged by being the most environmentally friendly transport mode.

Of course, once the majority of workers take the car to work, traffic jams will re-appear. However, humans tend to stick with a decision once it is made, in order to remove cognitive dissonance and maintain a (comfortable) status quo. The impact of traffic jams on the choice to take public transport to work will likely be minimal.

As the current situation unfolds it is time to re-evaluate the aims for rail transport in the Netherlands, and possibly even in Europe. Rail transport has seen its popularity decrease tremendously. The question is whether the demand will return and grow as was expected prior to the corona crisis.

Rather than opt for the wait-and-see method we propose to act now. We can utilise the current crisis and decrease in commuter travel to invest in the high-speed European rail network. During the climate change summit in Madrid last December (2019) it became painfully clear that the European rail network was fragmented and unfit to be a viable alternative for intracontinental flights.

However, due to the pandemic travel by air has come nearly to a standstill and the airline industry is hanging by a thread. Governments provide ‘essential’ airlines financial assistance of billions of euros to enable these companies to get through this difficult and uncertain time. The budget airlines, on the other hand, might not survive the impending economic crisis. And as recent information on climate change has (slightly) changed the public opinion on intracontinental short flights, it seems as if air travel will lose some of its popularity. This will provide a wonderful opportunity for European rail to place itself in the market as a worthy competitor.

Investing now in a Single European Railway Area is in line with the long term goals the European parliament set before the corona pandemic. By 2030 the length of the high-speed rail network should have been tripled. By 2050, the majority of medium-haul passenger transport should be carried out by rail.

The finances could be acquired by re-allocating the investments freed for managing rush hour. The focus should shift from short-distance burst transport to a long-distance (high-speed) network.

By building a better railway for the future we will not only move towards a more sustainable (European) transportation system but also create plentiful opportunities for careers in the railway industry.