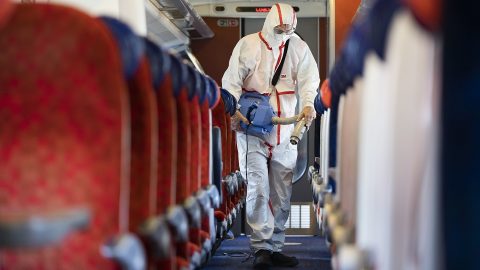 British railway operator Avanti West Coast is examining a new approach for cleaning and disinfecting trains. To this end, it started to use the Z-71 Microbe Shield, a compound based on quaternary amines. The first results show the highly effective level of this solution in disinfecting the passenger trains.

In order to keep their trains clean and safe, the railway operators are constantly looking for new solutions. Avanti West Coast, which is a newcomer in the British rail market and started its operations only in December 2019, has decided to apply the Z-71 Microbe Shield. The company’s dedicated workers spray the agent inside the carriages of its electric and diesel trains by using a “fogging” or misting machine. Special attention is given to the seats, doors, grab handles, tables and other interior equipment.

The first results have already proved the efficiency of the substance: it removes 99.9 per cent of viruses and bacteria from the surfaces. Moreover, the agent’s effect lasts for an extended period of time. As a result, the train operator needs to reapply the sanitiser on a monthly basis. “Keeping our customers and people safe is always our highest priority. This sanitiser is another addition to help safeguard their journeys,” Gus Dunster, Executive Director of Operations at Avanti West Coast, said.

The Z-71 Microbe Shield was developed by Zoono, the New Zealand-headquartered company. Due to this, the product is also known as the Zoono Z-71 sanitiser. It does not include alcohol compared to the vast majority of disinfectants. The Z-71 agent is based on a quaternary ammonium compound that is commonly used in such popular products such as toothpaste, contact lens products, cosmetics, soaps. According to Zoono, this sanitiser was tested several times. The previous trials confirmed the high efficiency for disinfection at a level of 99.9 per cent.

Read about other disinfecting solutions: