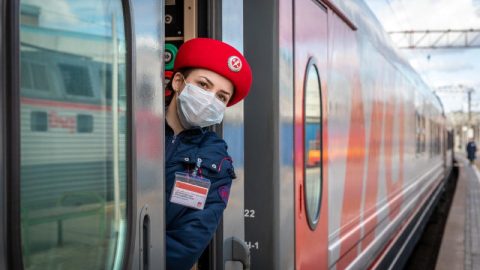 The COVID-19 pandemic had forced Russian Railways to significantly change its operations. After suspending almost all the international trains, it is still running the domestic connections with some safety restrictions and disinfection campaigns. Additionally, the state-owned company has implemented the new requirements for the new rolling stock.

Starting from 1 May, Russia has been daily documenting around 10,000 new cases of coronavirus. In some days, the data hit the mark of 11,000 cases. As a result, there are over 252,000 confirmed cases in the country (as of 14 May 2020). In these extraordinary conditions, Russian Railways (RZD) continues its domestic operations albeit in a reduced schedule. To provide safe trips for its passengers, the state-owned company has already implemented a wide range of measures.

In early April, RZD has introduced a new seating plan for its long-distance and high-speed trains in order to maintain social distancing between the passengers. Initially, the new scheme was designed until 30 April but it was extended by 28 May. No more than two passengers in one compartment (instead of four) are allowed to accommodate in the sleeping carriages and no more than three people in one compartment (instead of six) in the couchette carriages. If passengers travel as a family, they are able to purchase all four seats in a compartment of the sleeping carriages.

As for the high-speed trains with open carriages, the seating plan depends on their configuration: it could be 2×2 or 3×2. In a double row, a passenger can order a seat only near the window. In the triple-row configuration, the customers are able to accommodate near the window and at the aisle, the middle seat must remain free. For family travellers, RZD still provides an opportunity to occupy all three seats.

As for the rolling stock, Russian Railways began to pay more attention to the built-in air purification systems. The company has recently entered service 187 new carriages produced by Tver Carriage Works (TVZ) for the long-distance connections. All of them are equipped with this kind of solutions. Purification of the air incoming from the outside takes place in two stages. First, the coarse and fine filters retain dust and odours. Afterwards, the ultraviolet lamps disinfect the air. These lamps are completely safe for people, as they are under the roof of the car, and passengers do not contact them.

150 carriages are single-deck and belong to a new type for the Russian network. They are manufactured as double couplings: two carriages, one couchette and one compartment, have a comfortable gangway connection. Only one train conductor serves two carriages. Moreover, these coupled cars are equipped with environmentally friendly toilet complexes (a shower, a changing table, contactless soap and water dispensers, hand dryers and other options). RZD uses the new single-deck carriages on the Moscow – Vladivostok route, the longest one in Russia. The remaining 37 cars are double-decker, they run between Moscow and Saint Petersburg.

As the preventive measures, RZD provides daily disinfection of its carriages and trains. This service is delivered by the employees of the Centre for Hygiene and Epidemiology for Railway Transport. It is carried out by using detergents based on chloractive and oxygen additives, which are safe for human health and have a wide range of antimicrobial effects. The staff of the state dedicated agency disinfect around 1,900 carriages running on the long-distance connections every day. They pay particular attention to interior parts of a car that passengers contact most frequently: doors, handles, handrails, tables, wall surfaces.

Moreover, Russian Railways has equipped all the long-distance trains with non-contact forehead infrared thermometers. With the help of these devices, the train conductors measure the temperature of the passengers at least once per journey if the train runs up to 5 hours and at least twice a day if the trip is longer. At the request of any passenger, the procedure can be carried out additionally. If some passenger feels unwell during a journey and the temperature rises, the RZD’s staff invite medical personnel at the nearest station. It is worth to add that Russian Railways provides constant health monitoring of its employees especially those that interact with passengers.

In terms of train stations, RZD is focusing on disinfection of the buildings. Only in April, the company has sanitised several important several railway termini in Moscow and Saint Petersburg. The disinfection of train stations is also taking place at other major cities including Murmansk, Tver, Pskov, Vladivostok. In addition, more than 400 stations were equipped with hand sanitisers. Usually, dispensers are being installed near the entrances and the waiting rooms. Therefore, the customers have an opportunity to treat their hands with an antiseptic.