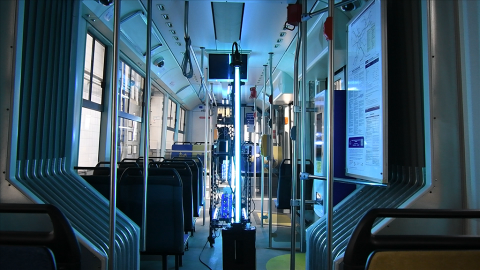 Railway operators in Poland are tackling the coronavirus pandemic by implementing various, sometimes extraordinary, solutions. Meanwhile, the public transport companies are also trying to keep pace with the trend. Among them is MPK Kraków that has begun to disinfect its trams by using ultraviolet lamps.

The disinfection takes place every day in a separated section of Podgórze tram depot due to safety reasons (ultraviolet waves are harmful to human skin and eyes). One ultraviolet lamp has a wavelength of 254 nanometres. Due to the dimensions of trams (including a length of 26 metres), their cleaning from the viruses is divided into two stages. Initially, the lamps are installed in the front part of a tram, then in its back part. The disinfection process in each part lasts for 7 minutes.

Moreover, MPK Kraków has implemented the other measures to fight against the virus spread. Of course, the public transport company reduced the tram and bus traffic on the streets of Kraków. Since the mid-March, they are running according to the Saturday timetable. MPK Kraków has been disinfecting its entire fleet and the stops around the city. It also provided its staff with several recommendations.

The tram and bus drivers are required to open doors on each tram and bus stops, including those on request. They are also committed to keeping the door opened at the termini in order to ventilate the vehicles. Starting from 4 April, the tram and bus drivers do not switch on the air-conditioning systems. The latter measure was temporarily introduced in accordance with the recommendation of the Powiat (County) Sanitary Inspector in Kraków.