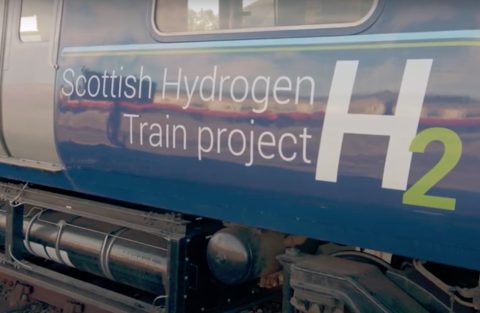 A project aiming to transform the future of the rail industry is underway at the home of Scotland’s railway heritage. A retired ScotRail Class 314 electric multiple is based at the Bo’ness & Kinneil Railway where it is being converted to a hydrogen-powered unit, for testing and proving of the technology. Hydrogen is intended for deployment across some of Scotland’s more remote railway routes.

Hydrogen is being promoted as a cleaner, greener alternative to diesel for non-electrified routes. The ScotRail project, in association with partners in government, industry and academia is the first step on a route to completely decarbonise the Scottish railway network. The devolved government in Edinburgh has set a target date of 2035 for a net-zero economy north of the border, with transport playing a significant role in that ambition.

An innovative hydrogen train project led by the University of St Andrews has successfully completed its next phase of testing and is on track to help the Scottish Government meet its ambitious Net Zero carbon targets. Testing of the hydrogen-powered train took place at the Scottish Rail Preservation Society (SRPS) located in Bo’ness, which included a series of workshops to define the future strategy for rail decarbonisation in Scotland.

The project is based on the conversion and re-use of a 40-year-old three-car Class 314 train to a hydrogen fuel cell electric powertrain. The ex-Class 314 train has been reclassified as a Class 614 hydrogen-powered train. Testing on track and the engineering development required to implement the conversion has kickstarted the growth of a critical skills base for hydrogen trains in Scotland.

Green hydrogen produced from the on-site electrolyser connected to the temporary refueller played a key role during the demonstration of the project. Refuelling infrastructure and its location will be critical to future train deployments. The funding support from Angel Trains for the electrolyser was pivotal to delivering a train running on green hydrogen. The project has driven learning on converting existing rail rolling stock and has shown how this can create new supply chain opportunities and skills for the emerging green economy, while reducing emissions from the Scottish rail sector. The Scottish Government has set a target date to decarbonise passenger rail transport by 2035.

“The hydrogen train project is a demonstration of commitment to our own ambitious [Scottish] Net Zero targets”, said Derek Watson from the University of St Andrews. “[This] is a real demonstration of the collaborative approach and partnership working for societal benefit. The University of St Andrews has set an ambitious target of being net zero by 2035 and is placing sustainability at the heart of its Strategy.

Government, academia and industry working together

Testing and demonstrating the train have been the next steps in showing that the clean energy transition is a valid ambition. The project is on target to deliver the critical understanding and knowledge to make hydrogen-powered rail a reality. Government, academia and industry are working together to develop the benefits of carbon-neutral technology. “The hydrogen train project has been an excellent opportunity for industry leaders in hydrogen, rail engineering and safety to collaborate with Scottish technology providers to develop a deployment-ready solution”, said Dr Ben Todd, the CEO of Ballard Motive Solutions in Dundee, one of the leading industry partners.

The Rail Safety and Standards Board recently took an in-depth look at the implementation of hydrogen technology within the existing railway network. Their views will be informed by the practical demonstration work in Scotland. Hydrogen trains are seen as a key enabler for the large-scale production of green hydrogen and the distribution of refuelling infrastructure across Scotland. The project is a wide partnership between the University of St Andrews, Transport Scotland, Scottish Enterprise, Ballard Motive Solutions, Abbott Risk Consulting, ARUP, Aegis and Angel Trains.