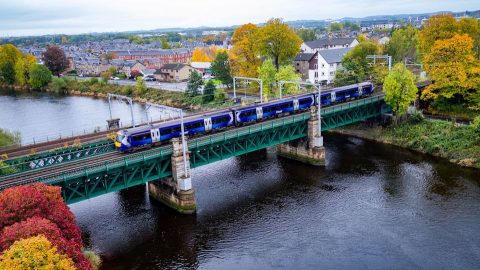 Sterling work in Stirling as Forth Viaduct makeover completed

Scotland’s Forth Bridge may be the most famous railway river crossing in the world, but there is another, equally important, if not quite so grand affair spans the same river, a little further upstream. Now the Forth Viaduct at Stirling, where the Highland Main Line to Perth, and the Kincardine branch to Alloa cross the waters of the River Forth, has been given an engineering facelift, just like its big, red brother downstream.

The infrastructure management agency Network Rail has completed a 2.7-million-pounds (3.22-million euro) makeover of the Forth Viaduct, just north of Stirling station. Engineers have successfully completed major improvements on the viaduct, extending the lifespan of the bridge and ensuring work on this scale will not be needed for another 25 years. It also looks pretty good too.

Work has been underway for almost a year. Back in January, the restoration team erected scaffolding along the 20 metre main span of the bridge, ten metres above the waters of the Forth. This then allowed the structure to be encapsulated so critical steelwork repairs could take place, including the removal and replacement of 300 steel rivets.

Other elements of work involved grit blasting to remove old paint and rust before then completely repainting the metalwork. More than 100 tonnes of grit was used as well as 3,000 litres of paint taking in excess of 6,000 hours to complete the blasting and painting operations. A new permanent walkway was installed through the structure and provides access for Network Rail engineers to undertake general maintenance to the viaduct when required.

One of the more challenging projects

The bridge carries mixed traffic on the Highland Main Line, heading north to Perth and Inverness. Traffic for the recently opened Highland Spring mineral water bottling plant crosses on these tracks. Other intermodal traffic includes the daily ‘Tesco Trains’ – carrying perishables and consumer goods to the Inverness railhead for the supermarket chain. The adjacent tracks carry passenger services along the north bank of the Forth to Alloa, with occasional charter, engineering, and freight workings carrying on downstream to Dunfermline and Fife.

“The Forth Viaduct was one of our more challenging projects given it spans a river”, said Allison Flanagan, bridge scheme project manager at Network Rail. “We are well versed is tasks of this nature, delivering improvements that help protect our vital assets for years to come, as we won’t need to re-paint the viaduct for at least another to two decades.

The work on the Forth Viaduct is part of a wider, rolling programme of renewals and improvements. Given the age of much of the infrastructure on the railways in Scotland, these are considered indispensable works for Network Rail. “It is essential to run a safe and reliable railway for passengers and freight customers”, said Flanagan. “I would like to thank the community for their patience during delivery of the work.”

The project is part of a wide-ranging bridge modernisation programme aimed at protecting and improving Scotland’s Railway, with over four billion pounds (4.8 billion euro) being invested to increase reliability and improve performance.