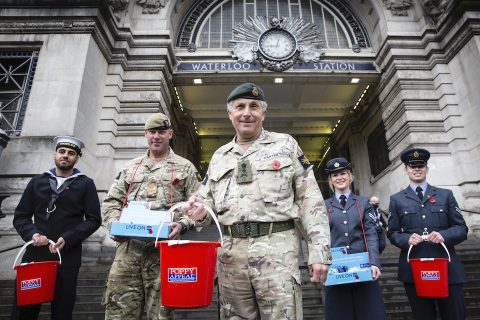 Published on 27-10-2022 at 06:00
Service personnel on duty at London Waterloo for Poppy Day AppealMatt Alexander/ The Royal British Legion (from Network Rail source)

The annual Royal British Legion Poppy Appeal, which raises money for the ex-service personnel, has been saved by a change of heart from railway unions. The strike planned for Friday 3 November has been rescheduled. That means that the annual nationwide charity collection at stations can go ahead after all.

The strike, called by the RMT trades union, was to be the first of three staggered days of action, in the latest round of confrontation over a wide-ranging dispute. There had been dismay expressed across the country that the annual poppy appeal, a tradition over a century old, would have to be cancelled.

The Poppy Appeal is an annual fundraiser, particularly associated with the railways in Britain. The Royal British Legion charity was originally established after the Great War, to help ex-service personnel and their families. The poppy represents the iconic flower that bloomed in the battlefields of Flanders on the Western Front. The railways played a huge role in the conflict, not least in the constant evacuation of wounded personnel from the front line, returning them to recuperation centres all over the UK.

The biggest single event in the appeal is a traditional collection at railway stations in the week prior to Remembrance Day (11 November). That had been scheduled for Friday 3 November, but planned strike action placed that in jeopardy, and threatened to derail the Legion’s efforts. However, after a public outcry, the union involved has relented, and cancelled their action on that day, replacing it with a walk out in the following week.

Separate disputes in London and Scotland

“Having been made aware of Royal British Legion Poppy day on November third, RMT NEC [National Executive Committee] has decided to re-arrange strike action for the ninth”, said an RMT statement. “A similar decision was taken during a 2016 dispute where strike action clashed with the event. The dispute remains live, and the union will continue its industrial campaign until we reach a negotiated settlement on job security, pay and working conditions.”

Conditions for a negotiated settlement

Elsewhere, the Scottish government run ScotRail operation has confirmed its services will face widespread disruption when the train operator’s members of the RMT trade union take part in a day of strike action this coming Saturday, 29 October. It is the second day of strike action by RMT members at ScotRail, following industrial action on Monday, 10 October. The trades union has rejected an improved pay offer made by ScotRail.

Speaking about the national dispute, RMT general secretary Mick Lynch said the their focus in this dispute is the rail employers who have yet to make an offer that will create the conditions for a negotiated settlement.
“I call upon the new Prime Minister Rishi Sunak to unshackle the rail industry so they can come to a settlement with RMT. We will vigorously pursue our industrial campaign until we achieve a deal”, he said.