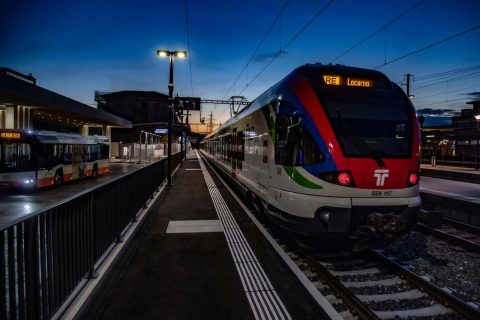 SBB taps the brakes in bid to save energy

SBB announced its concrete energy saving measures this week. It will reduce travel speed in the Gotthard Base Tunnel, turn down the heat in train compartments and switch off some of the lights at train stations in Switzerland. The measures will be in effect until at least February 2023.

With its efforts, SBB makes good on its promise from last month, when it announced that it would be taking concrete steps to reduce energy alongside the Swiss Federal Office of Transport (FOT) and public transport company PostBus.

From this month onwards, there will be less lights lighting up the facade of train stations. Decorative lighting such as Christmas lights will also be turned off. This measure applies to the 30 largest stations in Switzerland.

Where and when possible, the temperature in train cars will be reduced by 2 degrees. SBB estimates that this can result in savings of between 5,000 to 8,000 megawatt hours from November through February.

Local media report that passenger trains will slow down to 160 kilometres per hour in the coming months. The speed reduction is estimated to result in an annual saving of 2,000 megawatt hours, the equivalent of the yearly use of 500 Swiss households.

Backup solution not a solution

SBB finds itself in a bit of a bind when it comes to energy. Its preparation for a potential energy shortage is compounded by the fact that it cannot produce backup power of its own. SBB normally uses hydropower as backup solution, but at present its reservoirs are only 73-percent full, well below the 10-year average of 86 percent. In a bid to prepare for an energy shortage, the operator is trying to keep its reservoirs as full as possible. For this reason, SBB has been procuring energy at market prices, which puts a strain on its budget.

The Swiss operator first embarked on an energy saving campaign back in 2010. At the end of last year, SBB had realised savings of 500 gigawatt hours on an annual basis, equal to the requirements of 120,000 households. At the end of this decade, the operator wants to have reduced its energy consumption by 30 percent compared to 2010.