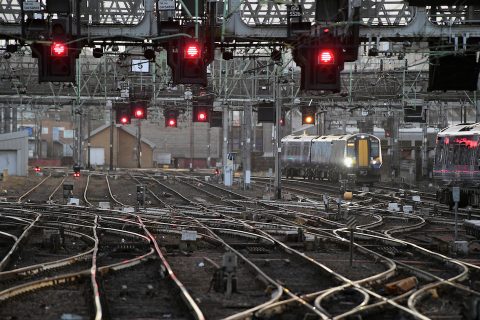 The summer of discontent on the British railway network looks set to continue throughout the winter. In an escalation of action, the RMT trades union (Rail, Maritime and Transport) has just announced the most disruptive series of strikes yet. Three days of action will cripple the railways for at least a week in early November.

The political turmoil in the UK government has distracted attention from the dispute over pay, conditions and job security. Hopes appear dashed that the appointment of a new transport secretary would lead to an early resolution. However, the RMT union has remained organised, and in accordance with UK law, has also balloted members to renew their mandate for strike action for a further six months.

The RMT, which represents rail professionals across the train operating companies and the infrastructure management agency Network Rail, has accused the latter of a ‘U-turn” on its settlement offer, and has called for three days of coordinated strike action next month. It says Network Rail attempted to impose drastic changes in working practices on their staff.

“Following intense negotiations with RMT, there was an agreement where the company would commit to an improved offer on pay and working towards a negotiated settlement”, says a statement from the union. “In a dramatic U-turn, Network Rail bosses reneged on their promises of an improved pay offer and sought to impose job cuts, more unsocial hours and detrimental changes to rosters. In a crass attempt to cut the union out of national negotiations, Network Rail have written directly to staff undermining delicate talks and have tried to rehash a previous deal that RMT has categorically rejected.”

Strikes on Network Rail will now take place on November 3, 5 and 7. Because the strike call involves signallers and critical safety staff, the dispute will disrupt services across Great Britain (England, Scotland and Wales). Northern Ireland, where transport matters are devolved and managed domestically, will remain unaffected by the strike action.

Rail freight operators remain indirectly involved in the dispute. However, estimates from independent sources say that only around seventy percent of freight trains will run during strike days. That equates to about one hundred cancellations each day. The effects however on passenger services will be much more profound. Previous strike days have seen the network almost completely brought to a standstill, with only about ten per cent of trains running. Passengers have again been warned not to attempt to travel on strike days and to expect disruption on days either side of the announced dates.

The Rail Delivery Group, the industry body representing passenger and freight rail companies, Network Rail and the High Speed 2 project, has previously called RMT strike date announcements a blow to public plans. Speaking of the previous round of strikes, a Rail Delivery Spokesperson said that strike action hit sports fans, friends and families planning to meet up. “RMT members themselves who have already lost, at the very least, many hundreds of pounds due to industrial action since June”, said their statement. “Rather than staging more counterproductive action that will further alienate the very customers we need to secure the long-term future of the industry, the RMT leadership should commit to serious reform. That is how we can improve services and deliver a fair deal for our people, passengers and for taxpayers.”

In separate disputes on the financially distressed London Underground and Overground networks, the latter operated by Arriva Rail London, RMT members will take strike action on November 3. RMT general secretary Mick Lynch accused the infrastructure agency of reneging on agreements. “The dishonesty of Network Rail bosses has reached a new low in this national rail dispute”, he said. “On the one hand they were telling our negotiators that they were prepared to do a deal while planning to torpedo negotiations by imposing unacceptable changes to our members terms and conditions. Our members are livid with these duplicitous tactics, and they will now respond in kind with sustained strike action.”

Frankly, frustrations, Brexit…,etc., simply symptoms, are most understandable!…
Now, benefitting of Brexit, England/Scotland, urgently should find, Goal and Strategy, the alternative, for a trustworthy infrastructure!
A win win is needed – and possible!
(Basics behind success stories, globally has been and is, nearness to ports!…)
With nearness, to and between ports, safely provided, by a new, a high quality railway, then the island will turn the vibrant, dynamic hub of hemisphere – and…