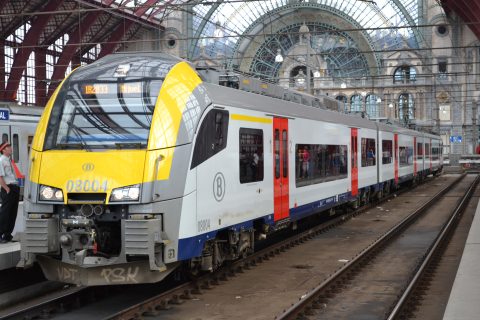 Starting on Friday, Belgian operator NMBS/SNCB will offer a monthly train pass at half price for domestic train travel. The move is intended to entice people to use the train for their daily commutes. The discount comes in the wake of several other promotional initiatives all over Europe.

The Promotional Trial pass, as it is called, will become available for journeys under and over 150 kilometres, and will be available until October 31. The so-called standard pass for journeys under 150 kilometres is only valid on the section of your commute. The unlimited pass gives you access to the entire network. The first day of use is September 16, this Friday. To sweeten the deal, NMBS/SNCB will throw in a free return journey between two Belgian cities of choice.

There are some limitations, however. For starters, you need to be a first-time subscription holder in order to be eligible for a discount. If you’ve had a pass in the past, you only qualify if you had non after March 15, 2022.
Secondly, travellers make cross-border journeys. That excludes trips to cities such as Maastricht (the Netherlands), Lille (France) en Aachen (Germany), which are right across the border.

Finally, travellers can only receive the 50-percent discount once.

The Belgian offer is the latest in a string of initiatives by operators in the wake of the COVID-19 pandemic. Austria famously introduced its KlimaTicket in 2021, offering Austrians unlimited use of public transport for a fixed yearly sum. In June of this year, Germany introduced the so called 9-euro ticket for use of public transport and regional trains for an entire month. At the end of this august, Spain’s free quarterly passes became available.

Once again, public transport offers a discount on monthly passes, which are already strongly discounted below ordinary tickets for single journeys. Commuters that decided in the past not to use public transport, often due to long travel times, will in general do so also with more discounted tickets.

Lower prices would more likely make a difference for tickets that are expensive in relation to distance, i.e. single tickets. The 9-Euro-ticket was suitable for single trips already, and it worked.